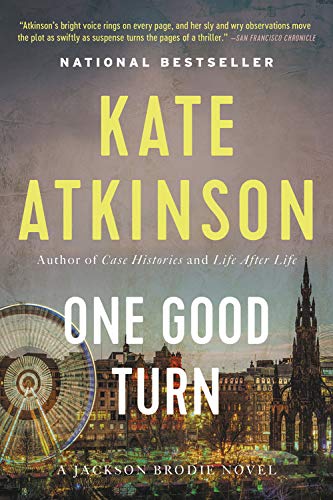 One Good Turn is the second book in Kate Atkinson’s Jackson Brodie series. I quite enjoyed the first book, Case Histories, but since there are only five books in the series I am being careful about not reading them too quickly. Atkinson is sort of like the police procedural version of Ian Banks; she is known for her excellent non-genre books as well as being celebrated for her stellar contribution to a particular genre.The main character in One Good Turn is Jackson Brodie, but like the first book, the story is structured as individual chapters told from the first-person perspective of multiple characters whose connection is not immediately obvious. For example, we spend a lot of time with the internal monologue of Martin Canning, a relatively successful author of World War II era cozy mysteries under the pen name Alex Blake. Martin witnesses a car accident and subsequent act of “road rage” in the very first scene of the book that is eventually completely pivotal to the plot. It turns out that another of the first-person characters we spend time with, Mrs. Gloria Hatter, also witnessed the accident, which happened in front of a long line of people waiting to get into an event during the Fringe Festival in Edinburgh. As it happens Jackson was there as well, because his girlfriend (one of the more unusual characters from  Case Histories) is acting in another play being put on for the festival, one that the now-wealthy Jackson has invested in financially in order to support his girlfriend.The thing that struck me the most in reading this second book in the Jackson Brodie series was how hilariously funny it was. There are several scenes and moments that are simply unbelievably amusing; they literally made me “laugh out loud.” Well-executed humor is very rare in the crime thriller genre (to be honest, it’s rarely well executed in most written forms, I think). I don’t think many other authors even try and even fewer are successful at doing this. One prominent exception that immediately comes to mind is Stuart MacBride; his DS Logan McRae books are absolutely hysterical, almost farcical portrayals of Scottish policing (set in Aberdeen, mostly).As with most murder mysteries, the question of “whodunnit” is just one of several puzzles for the reader and this is also true in One Good Turn. The first body to show up is an unknown female who Jackson literally stumbles over while playing tourist when visiting the coast near Edinburgh. He’s no longer a policeman or a private investigator so the authorities are unamused when they show up after reports of a man nearly drowned to discover a soaked Jackson with stories about a body he found that has disappeared in the waves. Of course, it doesn’t help matters that Jackson finds himself curiously attracted to the lead detective on the case, a young DI Louise Monroe. Interestingly, we also get first-person accounts from Louise’s perspective. This allows the reader to get information about how various crimes are (not perceived by the police as being) connected. In addition to the mystery of who is the woman Jackson found, there’s the question of who are the two guys who were involved in the road rage incident? And is it a coincidence that Gloria’s husband Graham Hatter happens to have been responsible for building DI Monroe’s house but is now in hospital in grave shape after spending a few hours naked with someone who is a dead ringer for Jackson’s corpse? Probably not.Overall, in addition to the humor, the puzzle of figuring out the connections between the characters and the crimes are the best parts of One Good Turn. Another strength of the books is Atkinson’s characterizations so the reader does become quickly invested in “what happens next” to most of them. In particular, Jackson, who again takes some hard knocks, both physical and emotional, in the course of the book. He’s the person we spend the most time with (I think) or at least the one readers are likely to care about the most. I’m really very curious to find out what happens next with him. I’m looking forward to reading the third book in the series, When Will There Be Good News?, and quite sad I have only three more opportunities to spend time with Jackson Brodie. Hopefully, Ms. Atkinson will write more before I get to Jackson Brodie #5!