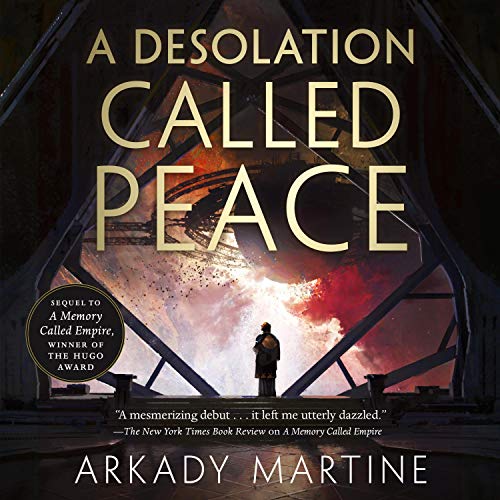 A Desolation Called Peace is the sequel to the celebrated debut novelA Memory Called Empire by Arkady Martine. The first book was nominated for multiple prestigious awards: Locus, Hugo, Nebula ,Clarke and Goodreads. It won the Hugo Award for Best Novel in 2020.Because of the acclaimed nature of the first book, the sequel was very much anticipated by many science fiction fans. Although I was less enamored of the first book than others, I also looked forward to reading the sequel and I was not disappointed.The main character in the books is Mahit Dzmare, a diplomat for Lesl Station, which is a small space station located near a jump gate. The setting of the books is the Tleixcalaani Empire, which controls a vast number of planetary systems. Tleixcalaan is a galactic superpower with military, cultural, and financial hegemony. Mahit has been fascinated by all-things Tleixcalaan all her life, so her appointment as the Lesl Ambassador to Tleixcalaan is her dream job. In the first book, A Memory Called Empire, Mahit arrives on Tleixcalaan and immediately discovers that her predecessor had been murdered and finds herself in a complicated diplomatic and political maelstrom. She is helped in navigating the dangerous waters by a minor diplomatic functionary assigned to her named Three Seagrass and Three Seagrass’s friend Twelve Azalea. During the book Mahit interacts with people at the highest echelons of Tleixcalaan society, including the Emperor himself (Six Direction) and Nineteen Adze (one of a limited number of Imperial advisors who represent the Emperor and implement his wishes). Mahit uses her smarts and the efforts of her Tleixcalaan hosts to figure her way out of a complicated situation that maintains the sovereignty of Lesl Station and her own body integrity.In the beginning of A Desolation Called Peace Mahit is back on Lesl Station and Three Seagrass is back on Tleixcalaan when news of incursions into imperial space by alien ships and a massacre of Tleixcalaan citizens on a remote industrial planet begins to roll in. Mahit is still recovering from brash decisions that she made while on Tleixcalaan and trying to re-acclimate herself to being “home” on Lesl when she is asked by Three Seagrass to go to a Tleixcalaan military vessel that is patrolling the sector of space where the aliens are active and may have received a signal from them that needs to be interpreted in order to make first contact. It’s basically an irresistible invitation to participate in a historic diplomatic first and of course Mahit says yes, although it is complicated to the unresolved status of her relationship with Three Seagrass.The other main characters in A Desolation Called Peace are the commander of the Tleixcalaan fleet that has encountered the alien ships, Nine Hibiscus, and the 12-year-old “90%-clone” of the former Emperor, Eight Antidote.In my opinion, one of the key failings of the first book was its focus on language (in particular poetry) and the depiction of the central political conflict as a process of sussing out the motives of the characters struggling for supremacy by parsing what they said (and left unsaid). That’s not to say that there wasn’t action in A Memory Called Empire, but the real meat of the story was often in the thoughts about the action. This “chatty” problem is mainly rectified in the sequel. I think there’s more action in A Desolation Called Peace and although there is still a fair amount of space devoted to characters thinking and talking about the action, the amount of time the book spends in character’s heads seems less prominent in the sequel.The key themes in both books are culture, communication and compatibility. In A Desolation Called Peace the question is central to the plot because Nine Hibiscus (and Mahit and Three Seagrass) are trying to determine if it is possible to communicate with alien beings, and once they show that they can do so, how compatible they are.Tleixcalaan culture is geared towards domination, never accommodation, but it is clear these aliens are at least as technologically sophisticated, so the question of compatibility becomes central to the plot. In the first book Mahit was the outsider treated like a barbarian by Tleixcalaan citizens while in the second book because the power differentials are undefined who will play which role in the interaction with the aliens is unclear.In A Desolation Called Peace the reader spends a fair amount of time with Eight Antidote, who literally is the heir apparent to the Tleixcalaan Empire. Because of his age (and position) he becomes the vehicle the author uses to show the reader different aspects of Tleixcalaan culture and how contingent communication (and interpretation) are.Mahit is still central to the resolution of the plot and is definitely still should be considered the main character in A Desolation Called Peace but I think it is a clear improvement over A Memory Called Empire that there are multiple other characters to carry the narrative thrust of the plot. I enjoyed this book more than the first. Right now it is not clear if the Tleixcalaan books are a duology or a trilogy, but I would definitely love to read a third book featuring Mahit having further adventures in Tleixcalaan space!