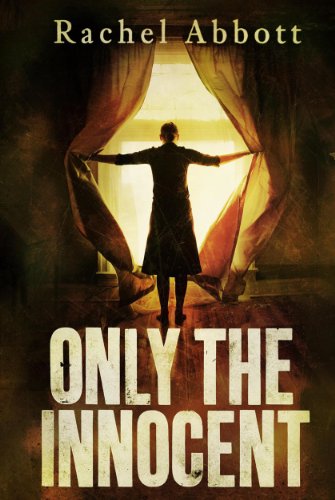 Only The Innocent is my first book by Rachel Abbott and it’s a doozy of a psychological thriller. The main character is DCI Tom Douglas but the meat of the story is sourced in the sadomasochistic relationship between Laura Fletcher and Lord Hugo Fletcher. Lord Fletcher is murdered in the very first chapter and the rest of the book is about finding out whodunnit as well as why and how. The answers are riveting, repulsive and really surprising.

Only The Innocent is the first book in the "DCI Tom Douglas Thriller series" which would seem to indicate that it is a police procedural. And to some extent it is, with the main plot fueled by following DCI Tom Douglas as he tries to solve the case of who killed Lord Fletcher. But there's also no question that a significant fraction of the content of the book is centered around the internal thoughts of Laura Fletcher, in the form of letter she wrote to her best friend Imogen Dubois who was previously married to Laura's brother.

Lord Hugo Fletcher was a celebrity well-known for running a non-profit that combated sex trafficking of young women. Through Laura's letters we discover that the benevolent, patrician face Hugo shows to the world is very different from the face Laura saw when they were alone.

We slowly learn what a controlling person Hugo was (he took care of every single detail of their wedding, kept the location of their honeymoon a complete secret, claiming that he was doing this all for Laura's benefit). We also learn that he has some truly bizarre views about sexuality, although we don't get a full sense of the full extent of his depravity until near the end of the book.

For most of Only The Innocent, one reads the book with one's mouth agape in horror as the depths of Hugo's perfidy are slowly exposed through Laura's letters. In fact, this is where the book goes a bit off the rails because it's hard to believe that any sane person wouldn't figure out a way to flee the situation that Laura was in at the time. Instead she ends up being institutionalized (twice!) in the years before Hugo is eventually killed.

Another main theme of Only The Innocent is the inclusion of family drama. In addition to the marital strife between Hugo and Laura, we also find out more about Hugo's relationship with his previous wife (and mother of his young daughter, Alexa, who Laura dotes on). There are multiple years-long estrangements that are revealed as the story unspools: Imogen and Laura's brother Will, Imogen and Laura, and Hugo and his sister Beatrice.

Overall I enjoyed Only The Innocent and I was actually surprised by the identity of the perpetrator (although in hindsight it was really quite obvious who it had to be). We get good insight into how DCI Tom Douglas operates and I am definitely interested in spending more time with him and loo forward to reading the next book in the series The Back Road.
Title: Only The Innocent.
Author: Rachel Abbott.
Format: Kindle.
Length: 459 pages.
Publisher: Thomas & Mercer.
Date Published: February 5, 2013.
Date Read: June 22, 2021.