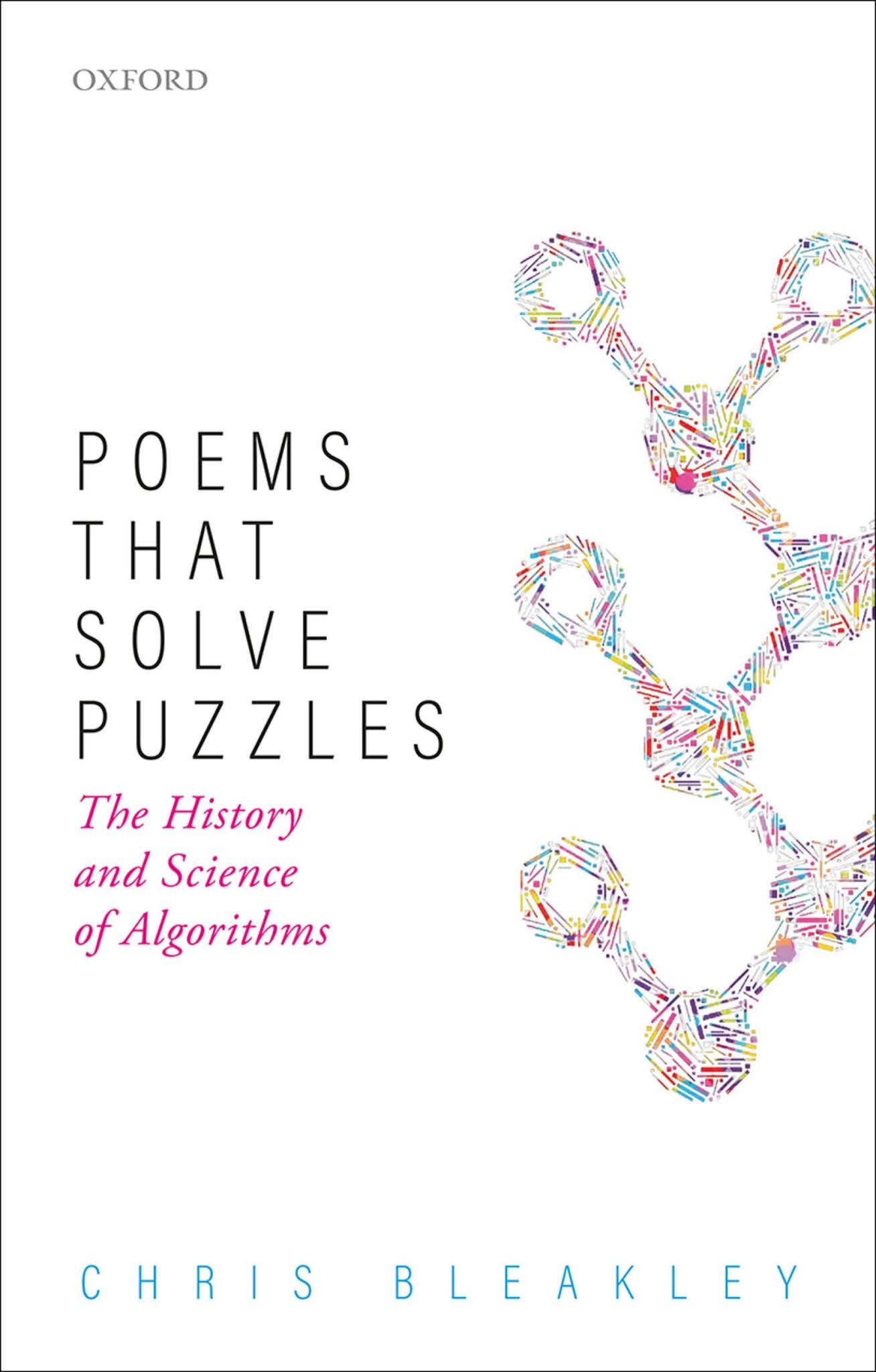 Poems that Solve Puzzles: The History and Science of Algorithms by Chris Bleakley is a book that is built around a stunning insight: that an algorithm, “a process or set of rules to be followed in calculations or other problem-solving operations, especially by a computer,” (Oxford Dictionary of English, 2010) when written down as a step-by-step list of instructions can also be viewed as a poem. This interesting device is used multiple times as the author converts problem-solving into poetry for various scenarios. Bleakley says his book is intended for people who don’t “know what algorithms are, how they work, or where they come from” but this is a book that can (and should) also be enjoyed by people who regularly use algorithms. Additionally, if you believe that anyone who teaches and learns mathematics (or any subject, really) should be exposed to the historical context of the subject they are teaching and learning, then it is clear that anyone who teaches, learns. or uses algorithms will benefit from knowing more about the history of algorithms as presented in Poems that Solve Puzzles.
Somewhat unsurprisingly, there’s a fair amount of overlap between the history of algorithms and the history of mathematics. For example, the source of the word we know now in English as “algorithm” comes from the name Al-Khwārizmī which was later latinized as “algoritmi.”  People familiar with the history of mathematics may recognize ''Al-Khwārizmī'' since he is known as the author of the booal-Kitāb al-Mukhtaṣar fī Ḥisāb al-Jabr wal-uqābalah (The Compendious Book on Calculation by Completion and Balancing), one of the most famous ancient mathematics texts written in Arabic from which the term “algebra” comes from.
Similar to the self-evident truth that the history of mathematics is too large and wide-ranging a subject to be encompassed comprehensively in one book, the history of algorithms is also a very extensive topic. In Poems that Solve Puzzles, Bleakley addresses this problem by selecting for inclusion in the book just some of the most famous algorithms that the general public are most likely to have heard of or involve topics or buzzwords present in the zeitgeist of 2020. This is a reasonable choice to make in order to reduce the scope of a book on the history and science of algorithms to be more easily digestible, and a good one since it makes the book quite effective and affecting because the algorithms included in are thus more likely to be interesting to the casual reader.
This is not to say that everything in the book will be familiar to most readers. Even someone like myself who has taught multiple courses in the history of mathematics and conducts research in numerical analysis learned many fascinating nuggets of information about certain algorithms. In particular, I now have a much better understanding of the up-and-down (or up-and-down-and-up-and-down-and-up!) nature of the academic reputation of artificial intelligence after reading Chapter 11 (“Mimicking the Brain”), the longest chapter in this compact but engrossing volume.
Of course, considering the increasing prominence of networks and networking play in modern society, Poems that Solve Puzzles devotes considerable time to discussing the Internet, search engines and social media by recounting the history of how each of these phenomena developed along with describing the underlying algorithms involved at a level non-experts can understand.  Although there are no equations in the book which may have made the text more salient to more informed readers I view the efficacy of the book despite their absence an impressive feat of clear exposition by the author.
Overall, Poems that Solve Puzzles: The History and Science of Algorithms is an informative and entertaining book. It is appropriate for a wide swath of readers, from people who are interested in learning about what “blockchain” is without having to do any math to students and instructors in the mathematical sciences who need more examples of how these academic topics make important contributions to the technologically complex world we live in.

(This review was also published at MAA Reviews.)