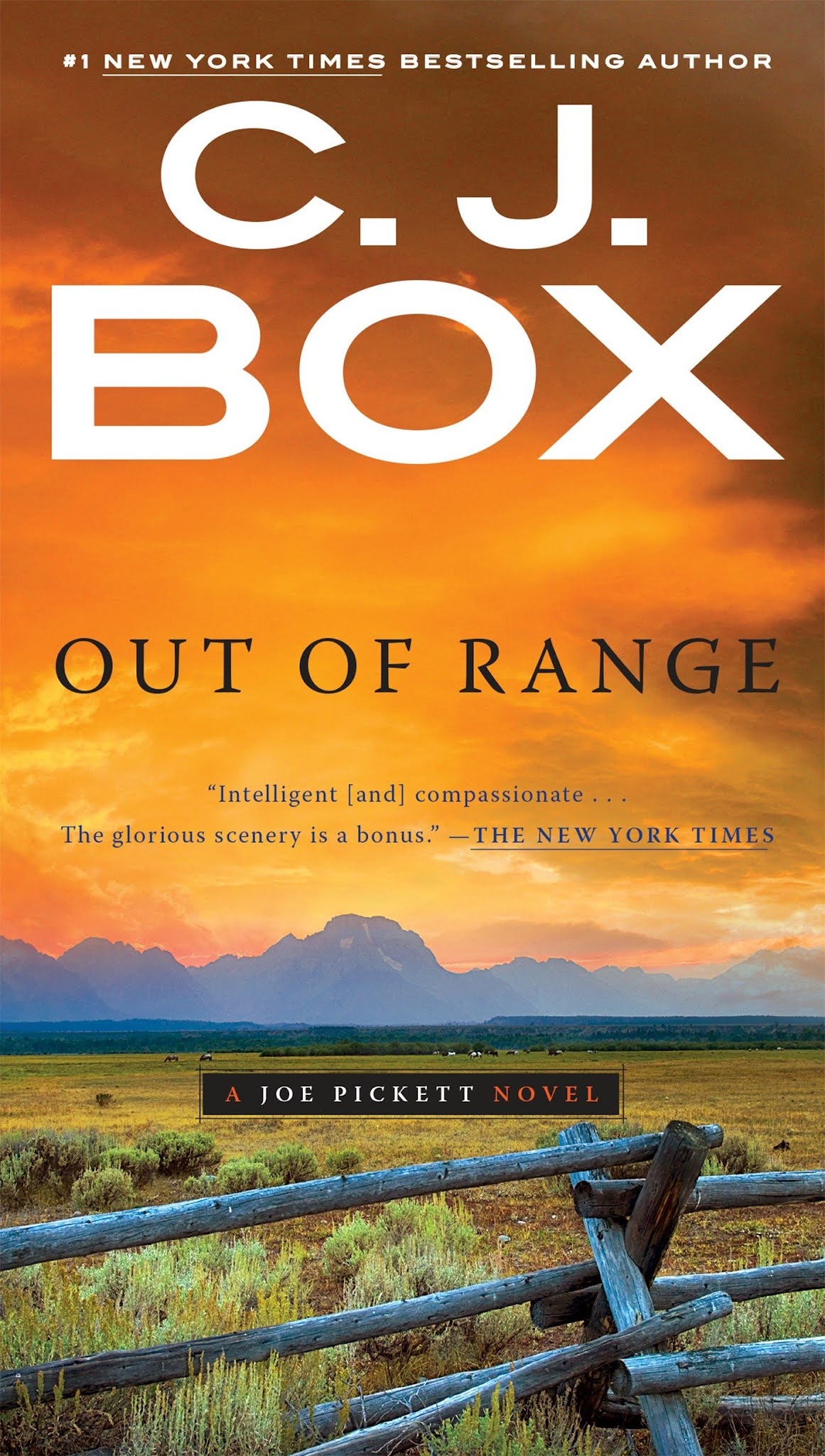 Out of Range is the fifth book in the police procedural crime fiction series by C.J. Box starring U.S. Fish and Game warden Joe Pickett. Set in the very rural setting of Saddlestring, Wyoming and starring a straight white male protagonist, these are an unusual set of books to be ensconced so firmly in my list of books I heartily enjoy reading. Just like the scenery of the Big Sky country they often describe, the Joe Pickett books are austere, airy and admirable.

In Out of Range, Joe is dealing with some changes in his life as a result of the after-effects of events from the previous book, Trophy Hunt. Some of this change is good, like one of his least favorite people (Bud Burnham) no longer being sheriff of Twelve Sleep County. And some of it is more nuanced, like the fact that his wife and eldest daughter Sheridan are entering the oil-and-water phase of their mother-daughter relationship.Out of Range begins with the discovery of the dead body of a longtime friend of Joe’s named Will Jensen who was serving as the Game Warden for Jackson (which is described as the “California” of Wyoming) when he apparently shot himself in the face. His boss asks Joe to temporarily take over the territory Jensen had patrolled and he (somewhat reluctantly) agrees to do so. Jackson is a huge step up from Saddlestring because it includes the Grand Teton National Park and if  Joe does a good job it’s possible he could get this area as a permanent assignment, which would mean more prestige for him and a more cosmopolitan life for his family. But because the opportunity is a result of a sudden death it means that Joe has to go to Jackson alone and leave his wife Mary Beth and his daughters behind. Before he leaves, Joe asks his friend (and mysterious loner) Nate Romanowski to look in on his wife and kids while he’s gone and keep them safe.When Joe gets to Jackson (2 days late because he had to take care of a wayward bear who was getting too familiar with human food) he discovers that maybe he didn’t know Will as well as he thought he had. Will had spent multiple nights in the Sheriff's drunk tank and had even been arrested for violent, disruptive behavior; his wife and kids had moved out several months before his body was found.One of the interesting features of the Joe Pickett books are the various contemporary issues facing wilderness areas that the author seamlessly weaves into the stories. This time one issue depicted is the popularity of “fad diets,” such as the idea of raising and caring for your animals before  (chicken, cows and pigs) before you slaughter and eat them. And the perils of being in a state essentially controlled by one political party. And the power and corruption of people behind large real estate developments. In this book, these three aspects are rolled into one "big bad."A new twist in Out of Range is Joe’s surprising besottedness with a mysterious woman who seems to know more about his friend’s death than she’s willing to talk about. (And who happens to be the wife of one of the big wigs that Will was having trouble with.) Simultaneously Joe and Mary Beth begin to have trouble connecting (literally and figuratively) and each blames the other (and especially the other’s absence) for the unhappy/problematic situation they are in.  And there’s an ominous subplot involving some weird threatening phone calls someone is leaving on Joe’s home office answering machine.
Joe has a cellphone but by the very nature of his work he is often "out of range" of communication  and he doesn't really seem to appreciate how annoying/worrying/problematic it can be for people trying to reach him to not be able to do so. Another interesting feature of the books is how self unaware Joe is about the feelings of others and his own feelings. He also doesn't react well to authority and often gets in trouble for doing things that his superiors would prefer he didn't do. He has his own very strong belief in right and wrong is rarely convinced to change his course of actions once he has decided what to do.
In the end, Joe (of course) does figure out what happened to his friend and has a fair number of adventures as he unearths the tensions and secrets that Will was dealing with before his untimely death. And some exciting and important developments occur back at Saddlestring that will be interesting to see how this changes Joe’s view of the way he does his job in the future. And Nate disappears. Again. Hopefully the ramifications of these events will be addressed in Book 6, In Plain Sight.