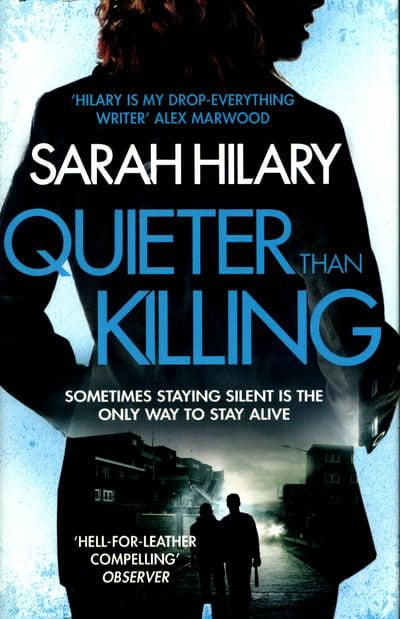 The fourth book in the DI Marnie Rome series written by Sarah Hilary is Quieter Than Killing. (I have enjoyed the others, Someone Else's Skin, No Other Darkness, and Tastes Like Fear,) This time the story is about a series of violent attacks of people who have previously been accused or convicted of violent or criminal behavior. DI Rome and her partner DS Noah Jake realize that they are looking for a vigilante, someone who has taken the law into their own hands (and decided to break the law in order to punish others they think deserve it).
As they try to find the vigilante, Rome and Jake are also faced with the kidnapping of the 10-year-old so of a jailhouse informant as well as the trashing of the house where Rome’s parents were murdered by her adopted brother, Stephen Keele, who has been moved to an adult prison now that he’s over 18.
There are multiple strengths in these Sarah Hilary mystery thrillers and many of these strengths appear in Quieter Than Killing.
First among these is the depiction of Marnie as a strong female protagonist, working in a predominantly male environment of a police department that solves major crimes in London. Another strong feature of these books is the inclusion of Noah as an openly gay, Black police officer who serves as her deputy. (There are multiple references to how good looking Noah is, as well as his boyfriend Dan, but this doesn’t mean that he’s not subject to both racism and homophobia while doing his job.) Hilary does an excellent job of fleshing out many of the characters in these books, especially in the ways she provides enough information to give the reader insight into their psyches, this includes the criminals and the police officers who try to catch them. One other compelling aspect of the Marnie Rome books is the backstory of Marnie and Noah, and as the books have progressed, there have been developments in how these characters have dealt with and adapted to changes.
I would definitely place these books in the genre of psychological thriller. In Quieter Than Killing, like in her other books, the author presents the crimes (and the criminals) in such a way that their psychologies are revealed and this has quite a memorable impact on the reader. I recommend this book and the others in the series (you don’t have to read them in sequence but why wouldn’t you?) to people who like the work of Jane Casey and Val McDermid, who are other British mystery authors with female protagonists in their books.