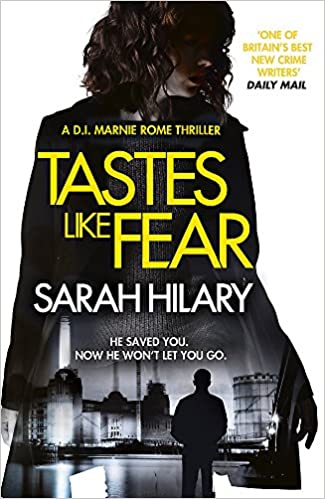 Tastes Like Fear is the third book in the Detective Inspector Marnie Rome series by Sarah Hilary. This series should be right up my alley: it’s a British police procedural featuring a female protagonist set in an urban landscape with a strong, diverse cast of secondary/supporting characters. But Hilary tends to focus the central questions of the books in the psychology of the characters, not only the perpetrators but also in the investigators. It’s not that I’m opposed to psychological thrillers in general. Other authors I often read and enjoy like Louise Penny, Karin Slaughter and of course Tana French often include this aspect in their books but to me there’s something different and off-putting in the way Hilary’s depicts murderous psychoses and emotional trauma from The ways these other authors do it. I think one aspect may be that they leaven it with either humor/genuine goodness (Penny), romance (Slaughter) and incredibly smooth prose (French) while it seems to play a larger role in Hilary’s books. After reading the first and second books, Someone Else's Skin and No Other Darkness, I was somewhat ambivalent about continuing to read the series due to the way the author deploys psychology and my annoyance at her penchant of putting her female protagonist in mortal danger.

Marnie Rome is a police detective who left home as a rebellious teenager and had the horrendous experience of being called to her childhood neighborhood while on duty to discover the teenage boy her parents had adopted a few years after she left home had brutally murdered them with a kitchen knife. Her primary partner and the series' main supporting character is Detective Sargent Noah Jake, a handsome British-Jamaican, openly gay multiracial cop who many of his police colleagues think is being helped by what they call “positive discrimination” in Britain (affirmative action in the USA). Marnie has had experience being a member of an historically excluded group in the London Police and uses her position and authority to train/nudge Noah to be the best copper he can be and ignore the racist flak he gets from fellow officers and the public alike.All that being said, I decided to dip back into the Marnie Rome series with Tastes Like Fear and I’m glad that I did. DS Jake plays a larger role in Book 3 than he did in Book 1 and since I would read an entire series built around him (Hint! Hint!) this was a plus for me. Another interesting feature of the series is that the central mystery is very different in each of the first three book so far. This time it’s about missing/runaway teenage girls who are showing up as corpses. So we spend a lot of time in the minds of messed-up teenage girls in Tastes Like Fear, but surprisingly it wasn’t as off-putting as one may have thought. Hilary also sets the story in an area of London where urban blight and runaway construction/gentrification are battling with another, which is basically another front in the ongoing class war in Britain. This is subtly well-done and another interesting part of the book.Overall, I would say that I am glad I changed my mind and continued the Marnie Rome series by reading Tastes Like Fear. I do intend to finish the entire 6-book series at some point, with the hope that DS Jake’s role gets bigger in later entries. (I also wouldn’t be opposed to both Noah’s and Marnie’s boyfriends having a larger part in the story.) The two ongoing plot threads that are not resolved invoke siblings(Noah’s brother is trying to escape a sketchy/gang-related youth and Marnie’s murderous half-brother is now old enough for adult prison) and I am curious to see how both stories develop further.