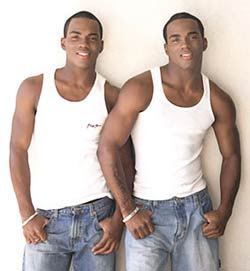 From the Philadelphia Daily News and other reputable news sources comes the story that 25-year-old identical twin brothers Keyontyli and Taleon Goffney (pictured to the left) have been arrested as suspects in a rash of burglaries which occurred in a Philadelphia neighborhood.


According to the report on Philly.com:

The 25-year-old Goffney twins, both of New Jersey, were arrested Feb. 19. They were charged with breaking into Moon's Beauty Shop at 9th and Washington streets in South Philadelphia and the adjoining Wings and More, using only a handsaw and ax to get in through the roofs of the establishments.

A Rite Aid at Front Street and Snyder Avenue was burglarized in a similar fashion the previous day. On Feb. 8, Taleon Goffney is alleged to have committed similar burglaries at Wawas in Nether Providence and Wallingford, Delaware County, according to police.

Chief Richard Slifer of Nether Providence said cash, cigarettes and condoms had been among the items taken.

The twins are the focus of a tristate Rooftop Burglary Task force, led by New Jersey investigators, the state where many of the 40-some rooftop burglaries have been committed over the last 18 months.

The Goffney twins are also the focus of numerous hardcore Internet gay-porn videos - some of which they star in together under the stage names Keyon and Teyon, according to several Internet sites that write about modeling and gay culture.

The three take the "audition" to a seedy hotel room. Although "Marc" is the focus of the encounter, the twins can be seen rubbing each other's chests and getting cozy.

I,too, thought it was interesting that condoms were one of the things that was stolen given the fact that free condoms are distributed by many cities (and I would guess Philly does also).

Wow. I know both of them. Sad to see Black Gay men make irreversible mistakes.

Hi, my name is Ta'Leon Goffney. I'm writing you in response to a story that was written about me on countless blogs and media sites. I've had much to consider over the years and have grown from my mistakes. My entire story was
Painted in the wrong light. I'm just trying to get the full truth out there and pay it forward by using my story as a warning to others. I've even completed a memoir that will encompass all that I've been through and the powerful lessons and message behind it all. I would like the opportunity to fully get my message across and let others know that true change is possible. In the meantime see: http://www.epgn.com/news/local/176-after-prison-one-half-of-gay-porn-twins-speaks-out-read-more-pgn-the-philadelphia-gay-news-phila-gay-news-philly-news-after-prison-one-half-of-gay-porn-twins-speaks-out and also: http://www.epgn.com/news/local/7485-25420973-gay-porn-twin-talks-life-postprison Thank you!!! Very much.