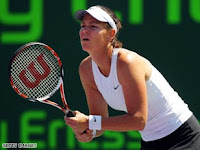 At the Sony Ericsson Open in Miami, Lindsay Davenport (also known as Mrs. Jon Leach) beat World #2 Ana Ivanovic 6-4, 6-2 in a match that was not as competitive as the one-sided score indicates.

Even though she gave birth to her first child a scant 10-months ago in June 2007, the American has always had some of the most powerful and accurate groundstrokes on the WTA Tour.

UPDATE: The day after embarassing the World #2, Lindsay lost (for the first time) to Russian Dinara Safina 6-3, 6-4.

That was a stunning beat down for the lovely Ana, who too can be a head case, but, that said, Mrs Leach is now more of a dangerous floater than a real contender for winning the whole thing, since who knows which Mrs Leach is going to show up, and, how pooped or focused is she going to be when she gets there, IMO.

And, the one major gripe is the HORRIBLE coverage, looks like the step child of sports is sinking fast, Fox has it, and, ESPN seldom even does updates on matches, ugh.

And while Serena outclassed Henin and Venus avoided playing her sister in losing to Sveta, the coverage at this tournament is truly as dreadful as anonymous says, only worse. Fox is bad, yet the evening coverage on the Tennis Channel is even worse.
Where does TTC get the announcing team? Makes you want to listen to Justin Gimelstob!