Nadal Comes Back To Beat Federer 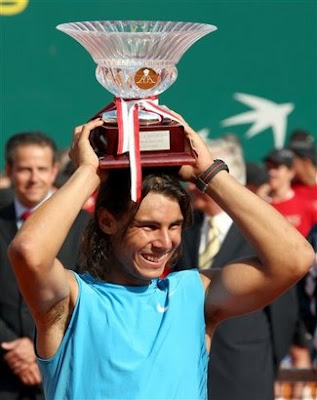 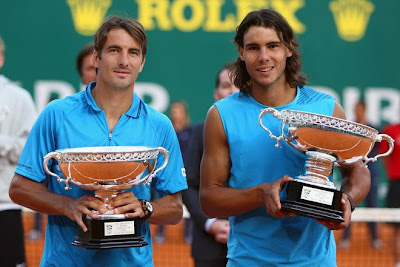 Rafael Nadal won his 4th consecutive Monte Carlo Masters Series title (and 24th career win) with a come-from-behind 7-5 7-5 win against Roger Federer on Sunday. Nadal is now 112-3 on clay since 2005 and has won 98 of his last 99 clay-court matches (his last loss was to Federer in the 2007 Hamburg final).
Oh, and then afterwards he teamed up with hottie Tommy Robredo and won the doubles title, too.
Posted by Ron Buckmire at 4/27/2008 02:53:00 PM

I must be the only gay male tennis fan who does not find Nadal attractive and just don't care for him nor his game, nor Roger for that matter, because of his tennis, and, since he is flopping and falling right out of the #1 ranking, I'll have to follow the games cute players, but, sadly Robredo does not fit the bill for cute either as do none of the Spanish players.

Roger choked and couldn't consolidate the break in the first set, and, gave away the second with two breaks, it was so painful, I didn't even watch the whole thing. Nadal is in Roger's head big time, and, until he gets rid of the negative, fearful playing this guy attitude, he will continue to get beat, even when he should have won, like yesterday. Maybe when Nadal gets that #$1 ranking Fed will wake up.

I agree that Rafa is totally in Raja's head. Who else would come back against the World #1 who had 4-0, and 30-30 in the second set before losing FIVE GAMES in a row and the functional equivalent of a bagel (7-1 after being up 4-0) besides nadal?

That's a bad picture of Tommy. Believe you me, he is HOT. Not as hot as Feliciano Lopez, but muy guapo just the same.