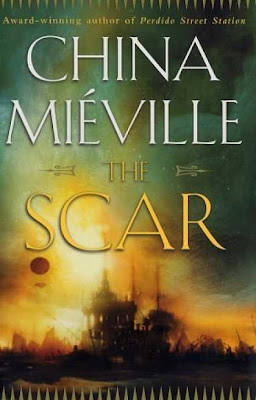 China Miéville's The Scar is another incredible work of fiction by this little-known, but award-winning author of speculative fiction.

Although, not as haunting as his breakthrough work Perdido Street Station (see MadProfessah's review here), The Scar is equally inventive and enthralling.

Again set on the planet of Bas-Lag, where his signature creation, the city of New Crobuzon, is situated, this time, most of the action takes place far far away from the city, but again the central characters are (displaced) residents of that intriguing, terrifying metropolis.

The Scar is clearly Miéville's homage to Melville's Moby Dick. One of the central plot threads in the book is a search for a long-rumored mythical beast, a gigantic sea creature large enough to dwarf, and tow, a floating city. This is just one of the many intriguing story lines in the book, which also features pirates, vampires, humans genetically modified to breathe underwater and stigmatized inter-species sexual liaisons.

In The Scar, the main character of the book is female, Bellis Coldwine, a translator of languages who finds herself on a boat destined for a port halfway on the other side of the world, fleeing from her beloved New Crobuzon because of her actions (and reactions) to the horrific events chronicled in Perdido Street Station. Bellis is an interesting, somewhat detached and not altogether sympathetic protagonist. Miéville makes the common mistake of having his protagonist a witness to a few too many pivotal moments in the plot, but this reader is appreciative of the use of this common writer's device.

There is nothing common about The Scar or the imagination of China Miéville--read this book and you will be uncommonly entertained.