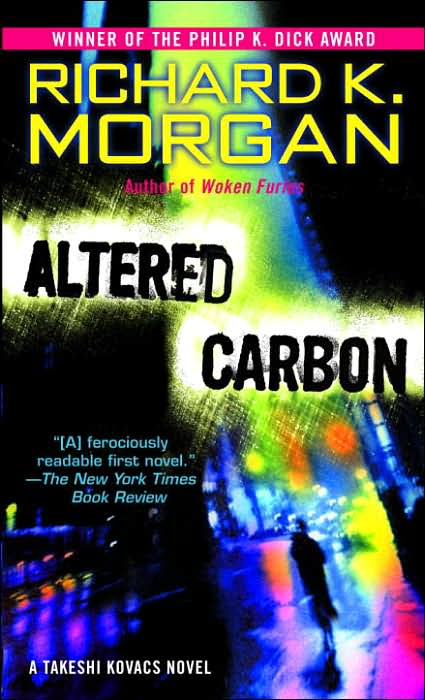 I have been hearing a lot about the Takeshi Kovacs series by Richard K. Morgan and after spending the first 6 weeks of the year or so engrossed in reading the first four books of the acclaimed fantasy series Songs of Ice and Fire by George R.R. Martin, I wanted to return to hard sci-fi instead of "swords and lords" fantasy.

Morgan's Takeshi Kovacs books are well-known for their seamless melding of Raymond Chandler-esque hard-boiled detective noir atmosphere with the dizzying speculative future of William Gibson's cyberpunk. Since I'm a fan of both mysteries and science fiction this sounded good to me, but I was blown away by how well Morgan immerses the reader in his detailed future of a time where human life has become less valuable because of a technological advance called a "cortical stack" which allows the consciousness of people to be downloaded into a new body (chillingly referred to by Morgan as a "sleeve" with all the concomitant utilitarian and commonplace characteristics the word implies) after death. Peter F, Hamilton and other hard science-fiction authors have postulated similar technological solutions to physical death but Morgan's writing viscerally communicates to the reader what it would be like to have one person's brain downloaded into another person's body and additionally Morgan's plot depicts several of the complications and conundrums that can result.

One of the first thoughts that comes to mind after reading the first chapter or two of Altered Carbon, is "This would make an amazing movie, like Blade Runner." In fact, Morgan's debut novel Altered Carbon, won the 2003 Phillip K. Dick Award for Best First Novel and has been optioned by Hollywood to become "a major motion picture."

Takeshi Kovacs is an amazing creation. He is the ultimate anti-hero, a violent, highly trained elite soldier (called a United Nations Envoy) who is also sensitive to the plight of the powerless. And he is the main character in a book which is, as one reviewer on Goodreads described it, "A sex fueled scifi badass ex-super solider detective noir novel that rocks really hard."

The plot gets incredibly twisted (in multiple senses of the word) at times and it is always hard to tell who the bad guys are from the really, really bad guys but in the end one is convinced by the innate goodness of Takeshi and always interested in seeing what will happen next. I can't wait to read the other two Takeshi Kovacs novels, Broken Angels and Woken Furies.