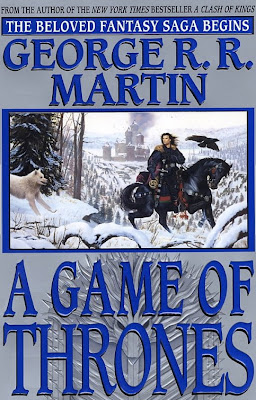 Thanks to a friend on GoodReads.com, I was convinced to ask for A Game of Thrones for Chrismuhkwanzukkah, and received it. I had heard about the series A Song if Ice and Fire and was aware that HBO is going to start airing a miniseries called Game of Thrones in April 2011.

Variety reports that there are over 4.5 million copies of the first four books in the series in print and it has recently been announced that the fifth book A Dance with Dragons will be released on July 12, 2011. Many fans of the series are pretty bitter because the fourth book in the series, A Feast for Crows was released in November 2005 and they have been eagerly awaiting new material for well over 5 years. And the entire series is said to consist of seven books.

It all started with the first book, A Game of Thrones, and this idea of political intrigue surrounding who will rule the Seven Kingdoms of Westeros is a central theme of the book and the series. The setting is one akin to medieval Europe with very little technology beyond the Bronze Age, although magic plays a limited role and one of the most important features is that seasons can last for years. In A Game of Thrones summer has lasted for nearly a decade, but the longer-lived people realize that this may augur an equally long bitter winter. The phrase "Winter is Coming" is a common catch phrase of the people of the North, and reveals their pessimism (some would say stoicism) about the future.

Martin has embarked upon an incredibly ambitious,m sprawling work of high fantasy. He tells his story in discrete chapters with the names and point of view of a single character. This can result in  major events of the story being revealed multiple times, from differing viewpoints or sometimes an important development for one character is revealed from a casual remark made by another. It's a compelling device, and it requires close attention by the reader. These are generally gigantic books (on the order of 900 pages) with literally dozens and dozens of characters with complex and complicated familial and familiar ties.

A Game of Thrones sets the stage for the entire series by introducing our two main protagonists: a set of families and rivals called the Starks (of the North) and the Lannisters (of the South). The Starks are dark-haired, simple and stoic while the Lannisters and blonde, green-eyed, wealthy and ruthless. In the beginning it is clear the reader is intended to identify with the Starks, as we are first introduced to the entire family: Lord Eddard Stark, his wife Catelyn Stark and their five children (Robb, Sansa, Arya, Bran and Rickon) as well as Eddard's bastard son, John Snow. The Lannisters primarily consist of Lord Tywin Lannister and his three children (Jaime, Cersei and Tyrion). Cersei is married to Eddard Stark's best friend King Robert Baratheon and has borne him three children while carrying out an adulterous and incestuous affair with her brother Jamie. Tyrion is a deformed dwarf more commonly known as the Imp.

As a Black, gay reader one of the most noticeable aspects of the books is the treatment of gender and regulation of sexuality. Homosexuality is barely mentioned, but the expectation of each gender are rigidly defined. The morals of the time strongly condemn all sex outside of marriage, although they only barely look askance as abortion/contraception (there is a special tea women can take soon after having sex which is supposed to prevent them from getting pregnant). Women are basically property of their husbands, and daughters are just there to be married off while her "maidenhood" (or virginity) is intact in order to seal connections between  Lords and prominent families, which are called Houses. There are a dizzying array of various Houses, the most prominent for our purposes are House Stark and House Lannister, each with their own castle, Winterfell and Casterly Rock, respectively.

Martin hooks you into caring for the main characters early on and the plot twists and turns which delight and horrify. Just because the Starks are our putative heroes does not mean that everything will end "happily ever after." Plus, for most readers, there are so many named characters that almost any reader can find at least one (if not more) that they can identify with and root for.

I don;t want to give away or discuss the details of the plot, but suffice it to say that you will not be disappointed if you take the time to visit Westeros and watch the Game of Thrones from the comfort of your home, reveling in Martin's imagination.