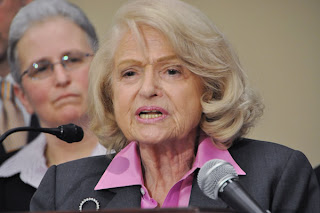 Edith Windsor, 81, is the lead plaintiff in a federal lawsuit in which oral arguments were heard before a 3-judge panel of 2nd U.S. Circuit Court of Appeals this week challenging the constitutionality of the so-called Defense of marriage Act (DOMA). Windsor was married to Thea Spyer in Canada and the two resided in New York state, which recognized same-sex marriages that were legally performed in other jurisdictions even before the state enacted legislation legalizing the performance and solemnization of same-sex marriages in the state in July 2011.

Chris Johnson of the Washington Blade did a masterful job summarizing the arguments presented before the judges:

Questions from judges hit on several topics, although the questioning from didn’t reveal much in terms of what how they’d rule in the case. Many inquiries were posed about the extent to which gays and lesbians enjoy political power within the U.S. government. Opponents of DOMA have argued the anti-gay law is unconstitutional because gays and lesbians lack political power, but BLAG contends the LGBT community has significant influence.
Asked by Jacobs about whether the test of political power is whether gays and lesbians have any power at all or whether power is diminished, Clement replied, “I think it’s the former, and I don’t think it’s not a overwhelmingly difficult test. … It’s a matter of whether you get the attention of lawmakers.”
Clement pointed to a friend-of-the-court brief signed by 145 House Democrats filed in the case on behalf of plaintiffs as evidence that the LGBT community has influence over the political process as he asserted the LGBT community should look to the legislative process to repeal DOMA, saying “This is an issue that could be left to the Democratic process.”
But Kaplan said the 30 marriage amendments that passed in state throughout the country are evidence that gay and lesbians are politically powerless, even though she emphasized these amendments have no bearing on the case at hand against DOMA.
The degree of scrutiny under which laws related to sexual orientation should face before the courts also came up the during the hearing. Judges asked whether they should overturn DOMA on the basis that such laws should be subjected to strict scrutiny, or more intermediate level of heightened scrutiny or be examined under a rational basis review. The level of scrutiny they apply could have implications on court cases related to sexual orientation.
In the event the court decided to rule against DOMA, Clement said the court asked the court not to apply heightened scrutiny, noting it would be the first appellate court to do so because the First Circuit Court of Appeals when struck down DOMA in May under rational basis review.
Kaplan said she was arguing for the higher level of review called strict scrutiny as opposed to the more intermediate heightened scrutiny because “being gay or lesbian is closer to being African-American than being a woman.” Laws related to gender have been subjected to heightened scrutiny, but laws related to race have been subjected to strict scrutiny.
But Delery didn’t articulate the same view, saying he was arguing against DOMA on the basis that it violated heightened scrutiny. While he acknowledged arguments could be made that DOMA fails rational basis, he wouldn’t commit to saying that should be struck down under that standard.

Clement basically relied on two rather old cases to defend his position, starting with 1972's Baker v Nelson, a case in which two men filed to strike down Minnesota's statutory ban on same-sex marriages a full 30 years before any court ruled definitely in favor of marriage equality. He also brought up an even more ancient (and controversial case), 1885's Murphy v Ramsey which involved the regulation of polygamy in the then Utah Territory and that relies upon one of the most reviled cases in Supreme Court jurisprudence, Dred Scott, as a source of its legal authority. Dred Scott is the 1857 case where slaves were declared to not be citizens of the United States and was one of the flames which fueled the conflagration that became the Civil War.

It will be interesting to see how long the Second Circuit takes to release their decision and whether they will be influenced by (or will influence) the decision by the United States Supreme Court to take other pending DOMA-related cases pending on appeal before the other United States Courts of Appeals.
Posted by Ron Buckmire at 9/28/2012 02:13:00 PM