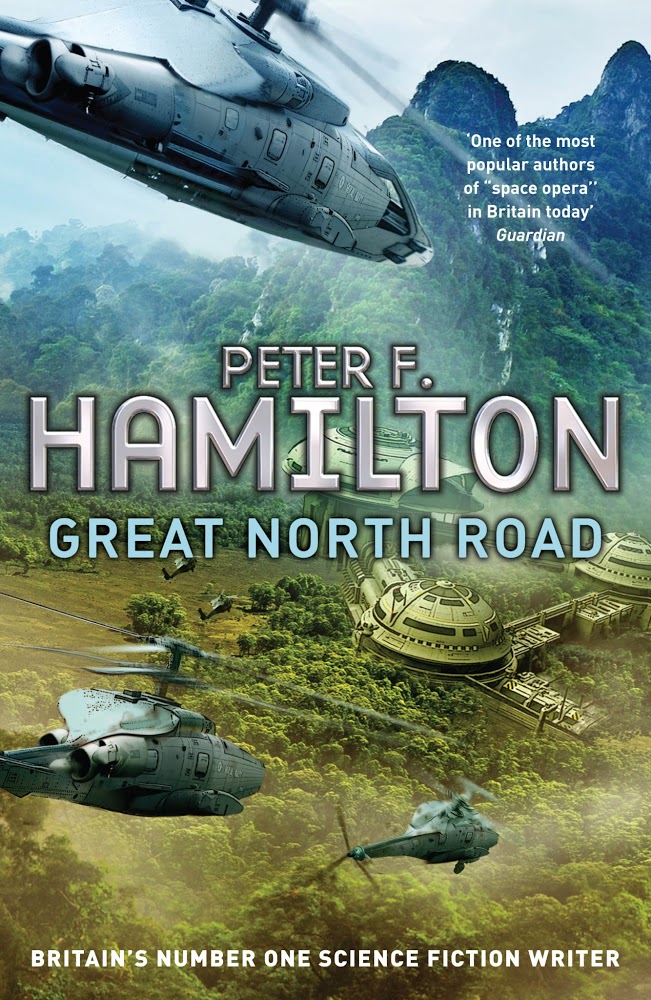 Peter F. Hamilton is one of my favorite expositors of modern "hard" science fiction, and he is widely regarded as one of the best (and best-selling) authors in this particular genre. Other names which you may be familiar with are Neal Asher, Alastair Reynolds, Iain M. Banks and Richard K. Morgan. Bizarrely, all these authors are British!

The only American speculative fiction author I have read recently is John Scalzi, who is also well-known for his popular blog Whatever and for being the president of the Science Fiction & Fantasy Writers of America (SFWA), the people who put on the Hugo awards.

Hamilton is known for his dense intricate plots, often with a central mystery and a character who neither the audience or the other characters realizes is someone (or something) very different from what they appear to be. He also is known for his intense action scenes and extremely long and satisfying novels.


When attending a Newcastle murder scene, Detective Sidney Hurst finds a dead North family clone. Yet none have been reported missing. And in 2122, twenty years ago, a North clone billionaire was horrifically murdered in the same manner on the tropical planet of St Libra. So, if the murderer is still at large, was Angela Tramelo wrongly convicted? She never wavered under interrogation, claiming she alone survived an alien attack.

Investigating this potential alien threat now becomes the Human Defence Agency’s top priority. St Libran bio-fuel is the lifeblood of Earth’s economy and must be secured. A vast expedition is mounted via the Newcastle gateway, and experts are dispatched to the planet – with Angela Tramelo, grudgingly released from prison. But the expedition is cut off deep within St Libra’s rainforests, and the murders begin. Angela insists it’s the alien, but her new colleagues aren’t sure. Did she see an alien, or does she have other reasons for being on St Libra?

I still count science fiction as my favorite genre, with mystery a close second so I was very happy to hear that Hamilton was combining the two genres in Great North Road.

The results are pretty great, although as a mystery set in 2143, the best parts of the book for me were the science fiction aspects. One feature of Hamilton's writing is that he includes many of the "little" details in how regular people live in a technologically advanced future that we can barely imagine. This allows one to really get a sense of what life could be like in the far future and allows one to identify with the characters whose daily routines we learn the details of.

In Great North Road Hamilton focuses his attention on the familiar police procedures involved in solving a murder mystery when a dead body is found. It would seem this would be an easy task in an era where electronic surveillance is ubiquitous but what we discover is that some of the sensors have "malfunctioned" and the problem becomes one of data analysis. Hamilton is also a master at depicting the internecine politics of human organizations and he does so again here to great effect. Our character Sidney Hurst is a mid-level member of the police department and he is hoping to use his success in investigating this high profile murder case to get ahead professionally.

The other main character is Angela Tramelo, and her story plays out on the planet of St. Libra like something from Predator or Aliens. However, as the expedition proceeds dead bodies start appearing with increasing regularity and the suspense slowly starts to ratchet it up to intense levels, especially after an extensive flashback reveals a lot more about Angela's backstory.

The combination of the two stories (the thrilling alien adventure story and the futuristic police procedural) makes Great North Road a compelling read that will appeal to readers who love various genres.