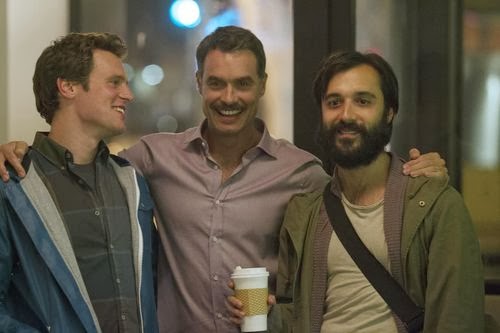 The first season of HBO's gay "dramedy" series Looking ends tonight when the 8th episode airs. The show has already been renewed for a second season and revolves around the loves and lives of three openly gay guys living in the San Francisco Bay Area. The lead character is played by openly gay actor Jonathan Groff and the central tension of the show is about whether his somewhat neurotic videogame programmer Patrick will choose Richie (Raul Castillo, who is straight in real life), a cute and very decent working class Latino barber with apparently little ambition, or Kevin (played by openly gay Russell Tovey), his handsome, British boss who has a longtime boyfriend and some palpable physical attraction towards Patrick. The series is co-created by Andrew Haigh (who directed Tovey in the sleeper gay hit film Weekend).

The other storylines involve the "co-lead" characters Dom (openly gay Australian actor Murray Bartlett), a just-turned-40 waiter who is starting to realize he needs to do something with his life before he can no longer get by on his good looks to hook up with twinks) and Augustin (Frankie J. Alvarez), an unlikable artistic type who is Patrick's college buddy and used to be his roommate until he moved out to Oakland to live with his very attractive (and Black) boyfriend early in the season.

The show is only 30 minutes long so I would prefer to see more of the Richie-Patrick-Kevin triangle as well as the potential courtship between Dom and older man Lynn (played by Scott Bakula).

Also ending its first season tonight is HBO's True Detective which stars newly minted Oscar winner Matthew McConaughey and Woody Harrelson as two detectives in a very atmospheric show about child murders and police misconduct in the Louisiana countryside and bayous. Apparently, neither Harrelson or McConaughey will appear in Season 2, so this may be the last time to see these two great actors facing off each other on "the little screen."
Posted by Ron Buckmire at 3/09/2014 09:03:00 AM