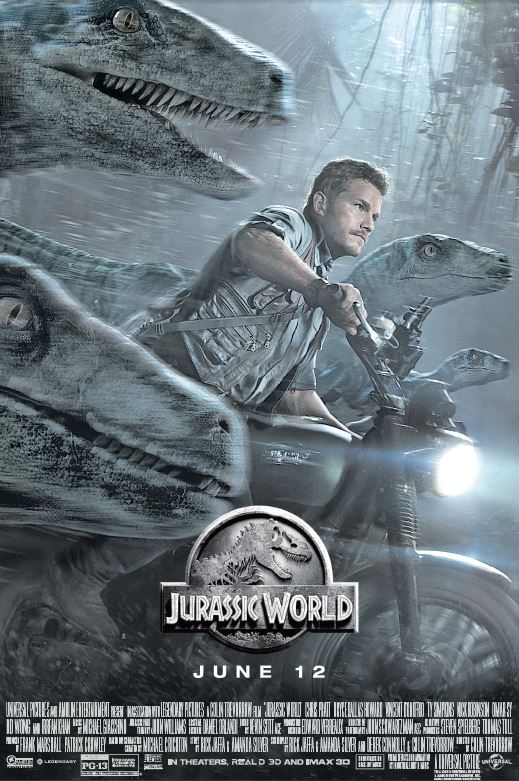 I'm a big fan of the original Jurassic Park film, which amazingly, was released way back in 1993. And, after last year's Guardians of the Galaxy I'm also a fan of Chris Pratt so when I started seeing the ads for Jurassic World I added the film to the shortlist of movies I wanted to see this summer. (Other movies on this very short list include Mission Impossible: Rogue Nation and The Man from U.N.C.L.E. Of course these all pale in importance to my anticipation of the release of the new Star Wars movie The Force Awakens on  December 18.)

Jurassic World acts like it is a direct sequel to the original Jurassic Park, basically ignoring the two intervening films The Lost World and Jurassic Park III. In fact, Jurassic World is practically a reboot of the original, with many of the themes from the original: strong lead female role, extensive depictions of corporate greed, many situations endangering children, multiple examples of employee betrayal, a prideful, egotistical scientist, several fiendishly clever dinosaurs and lots of terrifying chase sequences.

There are two notable aspects of Jurassic World which are different from the original. The first is the idea that because there has been an operating dinosaur park for years two things have happened: 1) the park has become geographically huge, with multiple attractions (hence the upgrade from Park to World); 2) The attending public has grown so accustomed to seeing dinosaurs that they have grown inured to the novelty of interacting with gigantic animals that went extinct tens of millions of years ago.

Because of the situation reflected by (2) the corporate owners (represented by Irrfan Khan's multi-billionaire Simon Masrani) have invested tens of millions of dollars in literally constructing a new dinosaur hybrid, which they have named (after extensive focus group testing) Indominus Rex. The head of the park is Claire Dearing, played by Bryce Dallas Howard (as a particular example of a successful corporate woman) whose nephews are visiting their very busy aunt. Pratt plays Owen Grady, the primary "dinosaur-whisperer" on staff who has been trying to train velociraptors (the hyper intelligent dinosaurs from Jurassic Park) to follow voice commands.

Of course Indominus Rex escapes and goes on a rampage across the island, putting Claire's nephews in mortal danger, and of course demonstrating the hubris of humans thinking that they can mess with Mother Nature with impunity.

Overall, Jurassic World is a fun, entertaining trifle, with a script with holes big enough for a Tyrannosaurus Rex to run through. (Why do the kids talk about the impending divorce of their parents but then the subject is never mentioned again? Are we really to believe they not have continuous video coverage of Indominus Rex's cage so that they can figure out where it is at all times? Why can't they use the tracking device to confirm it's location?) Regardless, it is still enjoyable and worth seeing in the theaters. (There's a reason why it is absolutely demolishing box-office records and has a healthy 82% rating from the audience on rottentomatoes.com)