MOVIE REVIEW: Inside Out 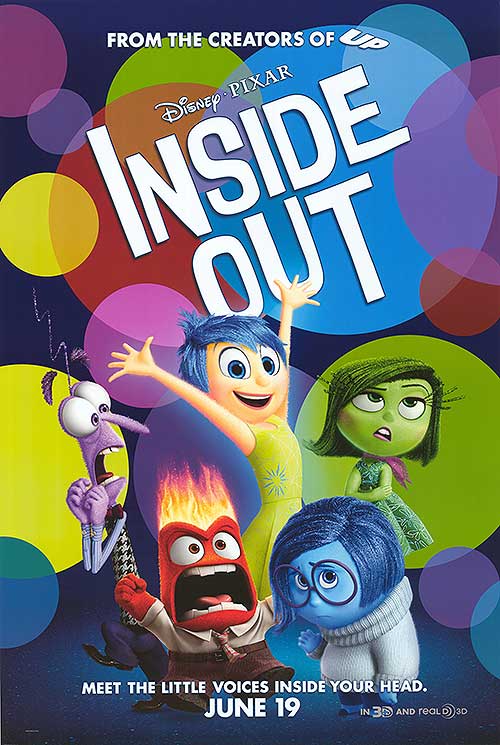 So we went downtown to L.A. Live (after having astonishingly good tacos at Guisado's on Sunset Boulevard in Echo Park) and saw Inside Out, which has a pretty astonishing rating of 91% on rottentomatoes.

The main attraction of Inside Out for me was that it was helmed by the creative guy behind Up (Pete Docter), which is one of my favorite Pixar films (although my all-time favorite is still The Incredibles). Inside Out is also interesting because it is literally about the voices in your head, and apparently is based on recent research in cognitive science and psychology.

The story follows an 11-year-old girl named Riley who moves from Minnesota (where she loves to skate) to San Francisco as her father pursues new business opportunities. This causes big changes in Riley's life as it means she has to leave her friends, go to a new school and adjust to urban as opposed to rural living.

The real action takes place inside Riley's head as we see animated depictions of how Riley's emotions work together to create and influence her response to stimula. The emotions in question are Joy (Amy Poehler), Sadness (Phyllis Smith), Fear (Bill Hader), Disgust (Mindy Kaling) and Anger (Lewis Black). We also see an interesting visualizations of how the brain works, from the storage of short term and long-term memories, to the idea of a "control center" and a vast unconscious.

As my other half put it, the plot is really an(other) example of the hero's journey into the Underworld, as we watch our main protagonist (Joy) try to get back to the control center with Riley's important permanent memories intact, hopefully before large segments of Riley's personality have been irrevocably altered. The most interesting aspect of the film is the interaction between Joy and Sadness. The two spend the most time together (of any two emotions in the film) and although they would seem to be polar opposites they have to figure out how to work together to do what is best for Riley in the end.

Overall, Inside Out is an interesting, unchallenging film that the whole family can enjoy and then have an interesting conversation about afterwards on the nature of emotions and relationships.