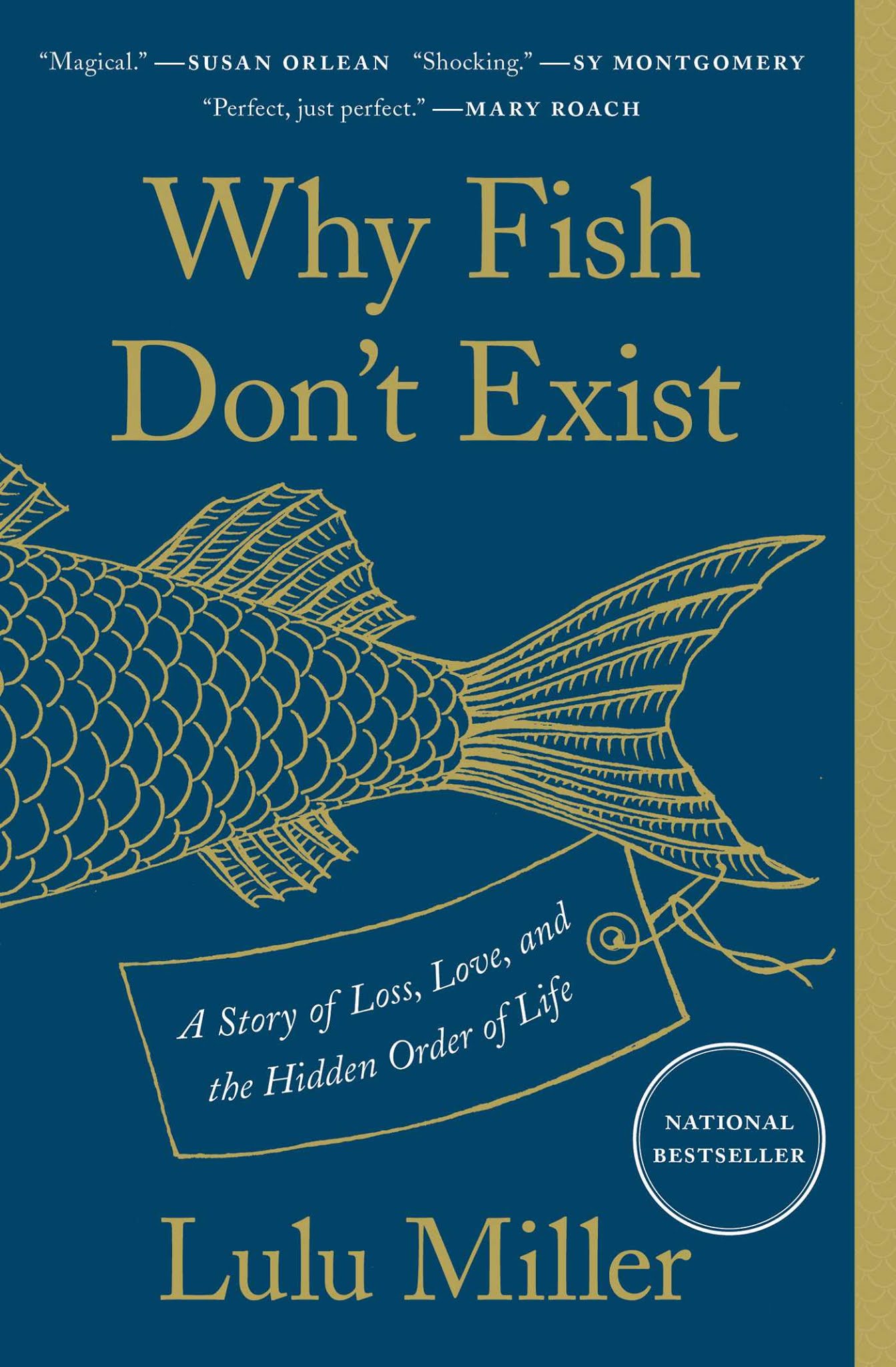 Why Fish Don't Exist: A Story of Loss, Love, and the Hidden Order of Life by Lulu Miller is an unusual book for me to read and review. It is one of the few nonfiction books I have read this year and it is one of the very rare books I have ever read as an audiobook. Typically, I only access audiobooks when on vacation with my husband (since he has the Audible subscription) and this is how I read Why Fish Don't Exist. We had both heard the author discussing her book on multiple NPR shows (e.g., Radiolab, This American Life) and so when we embarked on a road trip to visit three national parks this summer (Bryce, Zion and Death Valley) Why Fish Don't Exist was on top of the list to be downloaded for the drive. It turns out to be a delightful way to experience the book; it’s read by the author herself, and being a radio person her delivery is engaging and the prose is memorable. Plus, in audio format the book only takes less than 6 hours to complete (shorter than it takes to drive from Los Angeles to Utah).Why Fish Don't Exist is a fascinating and compelling story about the first president of Stanford University, David Starr Jordan, who was also one of the most prominent and prolific icthyologists (fish scientists) of his day, in the late nineteenth and early twentieth century. He was also an unrepentant and fervent eugenicist and used his fame and status to promote this vile and dehumanizing ideology in the United States and around the world. Miller includes information in the book that intimates that Jordan may have been responsible for the still-unsolved mysterious death of Mrs. Leland Stanford. One of the clear beneficiaries of the untimeliness of her suspicious demise (by poison, while on vacation on Hawaii) was Jordan himself.Why Fish Don't Exist is an exemplar of the maxim “truth is stranger than fiction.” Miller’s book is part biography of a great man of science, part autobiographical personal memoir and part philosophical musing on the nature of science. Miller injects pathos into the book by recounting how her scientist-father’s atheistic views, that human (and all other) life is ultimately immaterial to the fate of the Universe, that God doesn’t exist and that nothing happens after people die, had a measurably deleterious impact on a young Lulu Miller’s mental health. The search for a way to understand or refute her father’s nihilist view of life fuels her book’s examination of Jordan’s life and its focus on his obsessive project to identify and classify as many new varieties of fish as he could. Both Jordan and Miller are trying to produce order out of the chaos of the natural world.Miller is incredibly lucky in her choice of subject. Jordan’s life contains an astonishing number of extraordinary events, often catastrophic, which he suffers but shrugs off. This includes deaths of multiple family members at tender ages (two of his children, his older brother and his first wife), the complete destruction of his collection of rare and unique fish specimens obtained through painstaking worldwide travel by train and ship by natural disasters (twice!) and living through the Great San Francisco Earthquake of 1905. The highs and lows of Jordan’s life are cinematic in scope and scale.Miller is also incredibly effective at using intimate details of her own life to increase the emotional connection between her book and the reader. She describes her own suicide attempt as a teenager to emphasize the importance of her teleological search for life’s meaning. Later in the book she provides details of how her admission of a casual same-sex indiscretion led to the collapse of her first significant romantic (heterosexual) relationship and a subsequent professional downward spiral that delayed the completion of the book. It was during this period that she discovered the dark facets of Jordan’s supposedly shiny jewel of a life: the full-throated support for involuntary sterilization fueled by his eugenicist and supremacist instincts, the suspicious behavior to interfere with the official investigation into Mrs. Stanford’s death and the unseemly romantic entanglement with an Indiana University student when he was the youngest University President in America.Overall, Why Fish Don't Exist is an informative and engaging book about the complications and contradictions of life itself. Like all good art, it allows the reader to interact with it in different ways, and different readers will be drawn to different aspects, with most people being affected in long-lasting ways. Highly recommended!