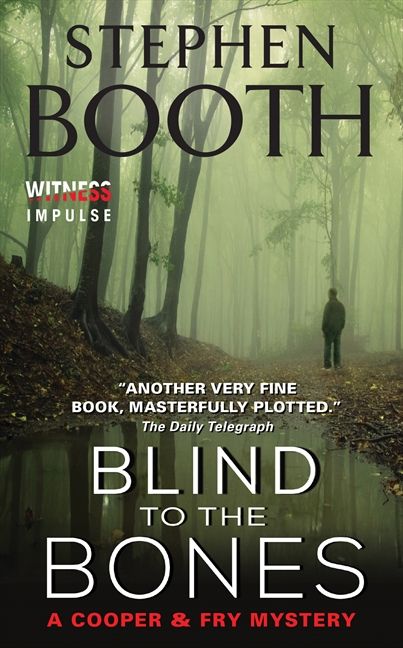 Blind to the Bones is the fourth book in the police-procedural, murder-mystery series featuring Detective Sergeant Deborah Fry and Detective Constable Ben Cooper written by Stephen Booth set in the Peak District in the north of England. In the first three books, there have been three very different but compelling mysteries in that Cooper and Fry are the main protagonists and the plot revolves around each of them solving crimes.  Blind to the Bones is somewhat similar to the other books in the series but this time instead of solving crimes together, each one of them has their own assignment, which eventually they both reluctantly recognize are linked. One of the curious and compelling features at the heart of the series is the fractious relationship between these two very different police officers. They are colleagues but they are certainly not friends; they are very different people with different personalities, life experiences and views on life. But they are both members of a small police force so they often need to work together to successfully do their jobs “to serve and protect“ the public.

There are three main mysteries in Blind to the Bones: 1) Who killed the local man whose body was found in an abandoned train tunnel (at the beginning of the book)? 2) What happened to the woman who has been missing for just over two years and whose cellphone has just shown up? 3) What crimes is that family with multiple delinquent children hiding? Of course, with all good mysteries there are several other smaller questions/puzzles to be answered as well.Blind to the Bones is an unusual entry in the series because much of it takes place in the small town of Withens, not the typical setting of Edendale, which is where Cooper is from and where most of the action in the first three books (Black Dog, Dancing with the Virgins, Blood on the Tongue ) took place. Cooper ends up being seconded to the Rural Crime Task Force to work on the dead body in the train tunnel while Fry gets assigned to deal with the delusional parents of the missing college student (who even after two years of not seeing their daughter refer to her in the present tense and have kept her things all over the house intact). Fry gets stuck working with the corpulent and indolent Detective Constable Gavin Murfin while Cooper has his own adventures in Withens and beyond.Overall, Blind to the Bones was not as compelling a read to me as the first three books in the Cooper and Fry series. I’m not exactly sure why. I think it might have been because by having each of the protagonists work separately on their own mystery it reduced the amount of interaction they had with each other, and one of the key features of the series has been the emotional frisson between Cooper and Fry. It's also significantly longer than the median mystery novel, well over 600 pages. Another quibble that I had with this entry was that it was resolved just a little too neatly for my taste, in such a way that it seemed unlikely the reader could have found the answers on their own, which seems a bit unfair. Regardless, I do think I will continue reading the series because I am curious to see how things develop between Cooper and Fry in future books, especially now that progress has been made an important project that Fry was working on in multiple books (thanks to the actions of Cooper).