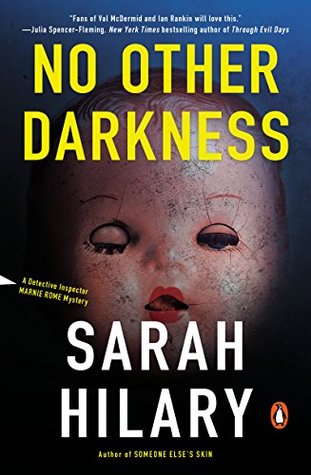 No Other Darkness is the second book in the British police procedural crime fiction series by Sarah Hilary starring DI Marnie Rome and DS Noah Jake. This time the main crime to be solved is triggered by the discovery of corpses of two young children in an underground bunker who have been dead for at least five years. Cold cases are always the most difficult of cases, and cases involving dead children are also incredibly hard to take for the personnel involved.

I was surprised at how different in style the second book in the DI Marnie Rome series was from the first, Someone Else’s Skin.  British-Jamaican, openly gay DS Noah Jake is still an interesting character but sadly he has less of a role in this story than he did in the first. No Other Darkness is much more of a psychological thriller than Someone Else’s Skin was, and in my estimation this ends up NOT being an improvement. I’m still interested in seeing how things develop in the lives of Marnie and Noah but  this change in tone made me less inclined to continue reading the series. The central, overarching question in the book is “what kind of person traps two children in an underground bunker and leaves them to die of hunger and/or thirst?” Trying to imagine and/or understand the psychosis of the perpetrator and watching as Marnie and Noah try to come to terms with the kind of person they are looking for is a harrowing experience for the reader.

There is one main thing that the series has going for it, and that’s Marnie (with Noah a very close second). In No Other Darkness we learn a lot more about Marnie’s past. She interacts with her “half-brother” Stephen Keele who is still a incarcerated for the double murder of her/his parents when he was a minor. Their relationship is of course complicated and emotionally fraught. Noah also has a complicated personal relationship; his ne’er’ do’ well younger brother is distracting him from his job trying to help Marnie solve the crime.

Bizarrely, Stephen is not the only minor child who has psychological problems in the story. The adopted child of the couple who discovered the children’s dead bodies, Clancy Boyle, seems to know a lot more about their circumstances than he has revealed initially.

The denouement of the book does involve another situation where Marnie is put into mortal danger as her hunch about a suspect explodes in her face. To me, placing your (female) protagonist in harm’s way is just a lazy way to raise suspense in a crime thriller and the very best writers are usually able to avoid this cliche while still producing pulse-pounding plots. I do hope that the author finds other ways to keep narrative tension in future entries because I do intend to find out more about what happens to Marnie and Noah next.