BOOK REVIEW: The Empire's Ruin (Ashes of the Unhewn Throne, #1) by Brian Staveley 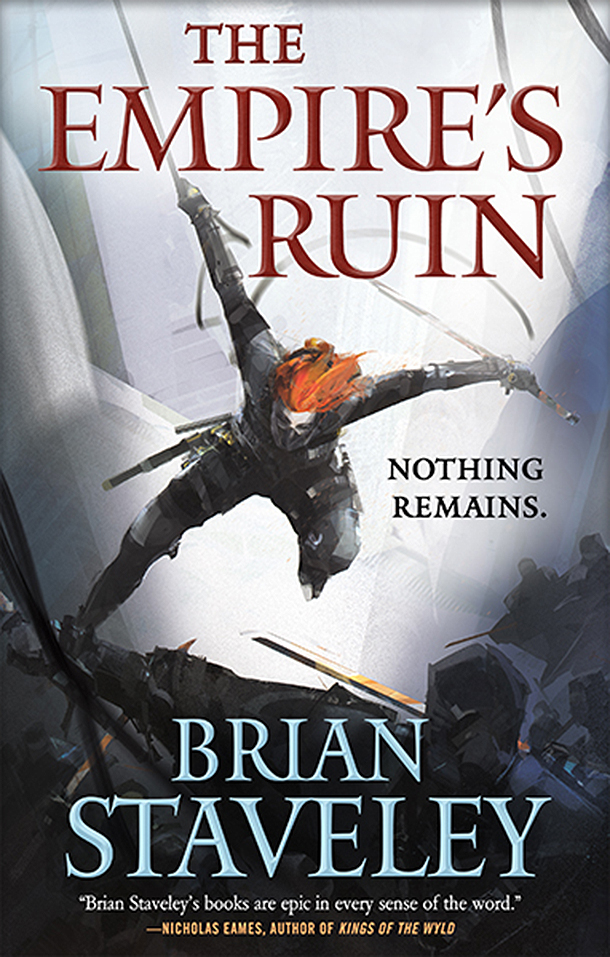 Brian Staveley is the author of the epic fantasy series The Chronicles of the Unhewn Throne (The Providence of Fire, The Emperor’s Blades, The Last Mortal Bond.) The Empire’s Ruin is the first book in a new series called Ashes of the Unhewn Throne that is set five years after the conclusion of the previous one.

The first series was primarily a trilogy centered around the three children of the Annurian Emperor (Adare, Kaden, and Valyn) and the ways their lives change following the assassination of their father and the subsequent struggle for power and control of Annur that follows. The three Malkeenian siblings are very different from each other. Adare is the oldest and only daughter, she was closest to their father and a consummate insider, familiar with and adept at palace intrigue and royal politics. Kaden is the oldest son and heir to the throne but has been sent years ago to the distant mountains of Ashk’lan to be trained as a Shin monk. Valyn is the youngest of the family and has been training for years to be a Kettral, one of the near-mythical, elite soldiers who ride the gargantuan raptors of the same name.

In The Empire’s Ruin, Staveley uses a similar tripartite structure, with the narrative following three characters, this time ones whom we don’t know whether they have (or will have) connections to each other. Gwenna Sharpe is a Kettral who fought alongside Valyn in the battles depicted in the earlier trilogy and in the very opening scene of The Empire’s Ruin her Kettral wing suffers a devastating military failure under her command. Ruc Lankatur Lan Luc is a priest of Eria, the Goddess of Love, in Dombâng, the culturally diverse, strategically located city in which the events of Skullsworn (Staveley’s fourth and most controversial book set in the same Annurian Empire as his other works) occurred. Ruc was raised by the Vuo Ton, a tribe of indigenous people who can survive living in the swamps surrounding Dombâng which are full of literally dozens of different species of deadly fish, snakes, insects and plants. Last is Akiil, a liar/thief/con man and former Shin monk (all known living Shin monks were massacred in one of the opening sequences of The Providence of Fire) who knew Kaden, the Heir Apparent to the throne in the Chronicle trilogy. One interesting aspect of the main characters in The Empire’s Ruin that I realized in writing this review that I hadn’t noticed before was that all 3 of the protagonists, Akiil, Gwenna, and Ruc have an important/central other person they are attached to/care for very deeply. With Ruc his “person” is Bien, a fellow priest of Eria who he apparently loves, perhaps in a brother-sister way but we discover may be less chaste as the story progresses. For Akiil, his person is Yerrin, a Shin monk that Akiil rescued from Ashk’lan but who has a decidedly unusual relationship with reality. Akiil also grew up in the slums of the capital city before going to join the Shin monks and he has a definite connection to Skinny Quinn, a girl who used to be part of his close-knit friends when they were young. Gwenna was attached to members of her Wing (the name of the cadre of soldiers she commanded in the Kettral) but the primary attachment she demonstrates in The Empire’s Ruin is to a young orphan girl she names Rat and whom she does her best to raise and protect on an incredibly dangerous and harrowing journey she takes with a group of men who generally would not be sad if she (or Rat) died or if they did the killing.

After the events of the Chronicle trilogy the only remaining Malkeenian sibling who is believed to be alive is Adare, who is now the Annurian Emperor. She is desperately trying to keep the Empire together but has lost the use of the kenta gates (these are special portals that allow certain people, namely Shin monks, to travel instantaneously between gates) and thus the ability to obtain current/relevant intelligence on the state of affairs in the far-flung sectors of her empire. Since Adare was in the first series, she is a familiar character to those readers and even if this time we don’t have access to her inner thoughts as we did when she was a central protagonist she definitely drew me into the story. Gwenna is also a somewhat known quantity so I think I identified with her section(s) of the book the most, although I rooted for Ruc the hardest to succeed. It’s difficult to root for Akiil because he’s literally a crook and he’s trying to trick/swindle Adare. Why should we care about him since he’s an asshole?

One of the strongest features of Staveley’s writing is his depiction of action. There are numerous fight set pieces that are simply stunning. He has set up the story in ways that lead to his characters often being in perilous situations that lead to action scenes. For example, Ruc and Bien are literally forced to become gladiators in a kill-or-be-killed religious ceremony in Dombâng. Gwenna is on a continent where the flora and fauna are warped by the environment to become deadly monsters. Akiil is trying to steal from a ewan who has a literal army of heavily muscled well-trained men who will kill for her at a glance.

Another strong feature of Staveley’s books is what is usually referred to as “worldbuilding.” He includes a dizzying array of cultural and religious beliefs and their nuanced depiction despite how abhorrent some would appear to the reader communicates a sense of verisimilitude to Annur as a real place (for the characters). In the Chronicle trilogy we were introduced to people who worship Ananshael, the God of Death, who are both priests and assassins. (Later, Staveley wrote an entire book called Skullsworn with one of these priests-assassins, Pyrre Lankatur, as the main character.) In this first book of the Ashes trilogy we discover that public death matches are a popular cultural and religious practice in Dombâng.

In the end, I found The Empire’s Ruin, the first book in the Ashes of the Unhewn Throne, to be a worthy successor to the first series and I am very confident that I will be reading more books Staveley writes in this series. As with the Chronicle series it’s clear that in addition to the main plot(s) involving the three main characters, there’s another one involving the gods (this time it’s the Nevariim, who are even more mysterious, and potentially even more evil, than the Csestriim from the first series). I’m hopeful that more information will be revealed about both groups, and their relationship to humans before the Ashes series ends.