My Thoughts on Hedges' "I Don't Believe In Atheists" 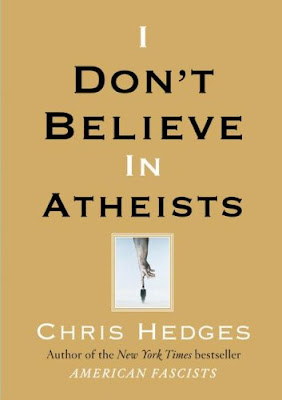 Chris Hedges’ I Don’t Believe In Atheists is a book that is intended to be a direct retort to the best-selling books by the so-called “Unholy Trinity” of Richard Dawkins, Sam Harris and Christopher Hitchens who are also known as the "new atheists." Hedges is the New York Times-bestselling author of American Fascists and a former foreign correspondent for multiple media outlets as well as a graduate of Harvard Divinity School. He sat down and wrote the book after becoming enraged following multiple debates with Harris and Hitchens in 2007. I was asked to review Hedges’ book and host FDL’s online book salon by Lisa Derrick of La Figa fame whom I met at the National LGBT Bloggers summit convened by Mike Rogers (of BlogActive and PageOneQ) in Washington, D.C. in December 2008. I approach the text as an academically minded, scientifically trained highly non-religious LGBT activist and blogger (at MadProfessah.com) who doesn’t really identify as an atheist but doesn’t shy away from the label. I have read (and enjoyed) Dawkins’ The God Delusion but had not read anything by Hitchens or Harris before being assigned I Don’t Believe In Atheists.

The thesis of Hedges’ text (cleverly distilled to the bolded words in the title), as I understand it, is this: the new atheists share a utopian vision of humanity with religious fundamentalists that has led to violence historically and that this philosophy must be rejected.

Hedges’ makes clear very early on that he doesn’t disbelieve in all atheists, there are some atheists who are acceptable.

An atheist who accepts an irredeemable and flawed human nature, as well as a morally neutral universe, who does not think the world can be perfected by human beings, who is not steeped in cultural arrogance and feelings of superiority, who rejects the violent imperial projects under way in the Middle East, is intellectually honest. These atheists may not like the word sin, but they have accepted its reality.

They hold an honored place in a pluralistic and diverse human community.


Atheists, including those who brought us the Enlightenment, have often been a beneficial force in the history of human thought and religion. They have forced societies to examine empty religious platitudes and hollow religious concepts. They have courageously challenged the moral hypocrisy of religious institutions. (pp. 24-25.)

I think very many atheists (or atheist-leaning agnostics like myself) would be annoyed by the notion that Hedges thinks that we have accepted the reality of “sin.” Umm, no, we haven’t! The notion of sin requires a religious imprimatur which as non-believers we reject (both the religion and the authority to declare certain acts sinful).

There are other reviewers, such as Barney Zwartz of Australia's The Age newspaper who are more persuaded by Hedges. In his December 27 rave review of the book, Zwartz says:

Hedges marshals an array of evidence and arguments against the "new atheists" from history, literature, philosophy and the atheistic double-deity of science and reason. This, combined with despair at religious fundamentalism, points him towards a profound pessimism about the "dying culture" of an increasingly militarised and corporatised America indeed, about humanity.

Hedges believes we are becoming an entertainment-dominated, image-based society less able to grapple with abstract thought. "Image-based societies do not grasp or cope with ambiguity, nuance, doubt and the many layers of irrational motives and urges, some of them frightening, that make human actions complex and finally unfathomable."

Interestingly, he thinks the new atheists are the product of this morally
stunted world of entertainment, appealing not to reason but to our deepest and
most irrational subliminal desires. "The simple slogans these atheists repeat about religion do not communicate ideas. They amuse us. They bolster our
self-satisfaction, anti-intellectualism and provincialism."

Basically, Hedges says a plague on both their houses. He wants us to reject
simplistic Utopian visions and accept the ineluctable limitations of being
human. This book "is a call to face reality, a reality which in the coming
decades is going to be bleak and difficult."

In my view, one of Hedges’ goals in writing the book is to try to replicate the success that the Unholy Trinity has had in energizing the approximately one-seventh of the United States population that describes themselves as “without religion” to actively embrace agnosticism or atheism. Hedges, however, would apparently like to energize the larger group of people who do describe themselves as religious (and are alarmed by the popularity of the new atheists)
in order to have them buy his book and embrace his opposition to the views he ascribes to the new atheists and, in so doing, diminish their influence upon the culture.

All in all, I do think that Hedges has skillfully written a useful text in that he does a good job of pointing out the ridiculous nature of religious fundamentalism and the concomitant dangers it poses to society. However, where he goes astray is arguing for a false equivalence between
religious fundamentalists and what he calls secular fundamentalists. These new
atheists, who as individuals may be vulnerable to some of his critiques, are not a monolithic group and Hedges is mistaken when he tries to repeatedly use Hitchens, Harris and Dawkins as the representatives of all non-believers. Some of us just don’t believe in (your) God and that’s all there is to it.

I bristle at the term "secular fundimentalist", as if we are on the same level as the religious fundies who dogmatically believe ancient holy books despite common sense or uh, science.

Next we'll be "secular extremists".

Its silly. And I can't for the life of me understand why "believers" would be at all disturbed by a rise in those who do not. It shouldn't matter a bit if you're neighbor doesn't believe in your heaven. However, the fact that it disturbs many believers is very telling indeed.