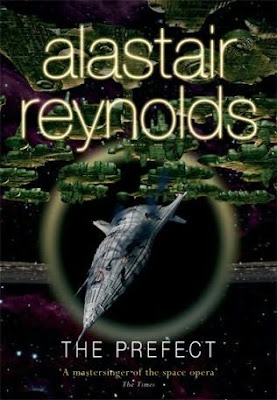 Despite never having heard his name before a year ago, British science fiction writer Alastair Reynolds has turned into one of my favorite authors.

In the space of about 8 months (December 2009 through July 2010), I have read five of his novels, all of which are set in his Revelation Space universe. Those books are (in the order I read them) Revelation Space, Redemption Ark, Chasm City, Absolution Gap and The Prefec.
The Revelation Space universe is at least as interesting as Peter F. Hamilton's Confederate and Commonwealth universes. The two British authors have similar ideas: humanity is flourishing hundreds of years in our future, we have met a few aliens and technology (especially in computing) has advanced in particular ways. Both universes feature a way for humans to "cheat death." In Hamilton's, a memory cell which contains the entire personality can be backed up and then inserted into a cloned copy of the original person, and people can generally select their age, sex and overall physical appearance. In Reynolds' universe a back-up of the personality can be made and then installed in either an "alpha-level" or "beta-level"simulation which runs on a computer. Alpha-level simulations are controversial, they are considered independent entities in their own right; beta-level simulations are more common and are more likely to be replications of the original human personality they were based on.
Reynolds' stories are darker, more cerebral and intricately plotted with secrets within secrets to be revealed to the reader during the execution of the plot. Hamilton stories are usually more straight-up swashbuckling military space operas, thrilling adventures that greatly entertain. Hamilton is still my favorite writer, but Reynolds gives him a run for his money!
A theme of Reynolds' work is the inclusion of complicated choices (often between multiple, equally bad scenarios) that his characters have to make and his obsession with identity and misdirection. Oftentimes a central question in the books is discovering the solution to a central mystery, and several times that mystery involves the "true" identity and motives of a central character.

The Prefect is set in a time period between the events of Revelation Space and Chasm City, set in the Glitter Band, a group of 10,000 human-made habitats set in orbit near the planet Yellowstone in the Sky's Edge star system. The title character is Tom Dreyfus, who is a member of Panoply, which is basically the police force for the 100 million people who live in the Glitter Band. Panoply officers are not allowed to carry guns, because their mission is to insure the process of democracy in the band, which occurs through nearly continuous electronic plebiscites of the populace. However, The Prefect at its core is really a standard detective novel, which I like because I am also a big fan of mysteries. It is reminiscent of Reynolds' best book to date, Chasm City, which also revolves around the work of a cop.
It is also a hard sci-fi novel. The book has profoundly altered humans known as Ultras, another group of altered humans known as Conjoiners, space battles, sentient computer programs and a possibly alien entity known as The Clockmaker.
If you like "hard" sci-fi and the work of authors like Hamilton, Reynolds and Neal Asher, you will almost definitely enjoy The Prefect. I did!