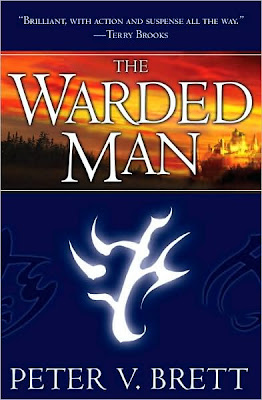 Thanks to the book review blog Walker of Worlds, I have discovered some new fantasy and science-fiction authors from looking at Mark Chitty's This Year's Top Reads: Peter V. Brett, Neal Asher, Eric Brown and Alastair Reynolds.

I have actually read a fair number of books by these authors since I discovered Walker of Worlds in December 2009, but the first book I want to review for "Thursday Reviews" is The Warded Man by Peter V. Brett. As I have mentioned before, it's much easier to read books than it is to write up reviews of them!
I have a backlog of at least a dozen book reviews that are in various stages of preparation at this point, and I just finished another novel (Joe Abercrombie's The Blade Itself) last night!

Chitty has a similar love that I have for grand-scale, military space opera, so he is also a big fan of Peter F. Hamilton. However, he is an even bigger fan of Neal Asher who I have just begun to get into. We both are not huge fans of fantasy unless it is done really well (like Patrick Rothfuss' The Name of the Wind) so when Chitty gave Peter V. Brett's The Warded Man a 10/10 review it caught my attention.

Since Mark Chitty does such a good job of setting the scene of the book, I will quote from his review:

The world that Peter V Brett has created here is wide in scope and full of character. From the vivid descriptions of the small towns on the outskirts of the cities, where night is always a dangerous time, to the cities themselves - huge and strongly warded against the corelings - there is much to admire. These places felt real, the rundown and ruined houses always a constant reminder of what can happen when wards fail. The cities have their big, luxurious houses while the images of despair that are brought to mind when the lowly shared shelters are mentioned add to the clear distinction of class. Despite all of this and how much I enjoyed the world every time I opened the book, the characters steal the show - and quite rightly too.

We follow our three main characters - Arlen, Leesha and Rojer - from a young age. This allows us to grow with them, feel their fear and desires and aspirations. What is good about these characters is their individuality, the way each one feels completely different from the others, yet there is a strong and wilful element that will not just lie down or continue on the road expected of them.

The corelings are demons that emerge once night falls and take different forms: sand demons, wind demons, wood demons and (the most dangerous) flame demons and rock demons. They are a fantastic invention, but I did have a quibble with Brett in that I don't think he did as good a job as he could have to make it clear what the demons were. First, I thought they were intangible spirits but by the end he makes it clear that they are completely physical beings that eat, bleed and defecate but somehow are magically prevented from violating an area with a ward (a special symbol) on it. I suppose this lack of information in the reader's mind about the nature of the corelings is meant to mimic the characters' ignorance about the demons; the fact that most people have no interest in even fighting the demons or finding out anything more than how to avoid them is a key plot point. However, I found it slightly frustrating that the demons could be both described as ghostly figures that materialized from under the ground as soon as the sunlight faded and solid enough creatures that with sharp teeth and talons and ichor for blood.

The book is quite suspenseful. Mark Chitty identified the most with the main character of Arlen (and he is given the most attention by the author) but I like Leesha more and felt that Rojer was given slightly short shrift. It is clear that Arlen is the title character (it should be noted that in the United Kingdom the book was released with the title The Painted Man, which Chitty thinks is a better, less revealing title to an important plot point but I disagree. I think The Warded Man is an improved title, although either way I figured out the plot point well before its reveal in the book). His journey takes up the majority of the book and ends up in a surprising and somewhat sad conclusion.

Excellent features of the book are its very realistic depiction of life in big cities and small towns in a culture which has almost no technology and the ways that class and gender impact the lives of the characters (there is almost no depiction of race, per se although there is some discussion of ethnicity). Also, the fight scenes between characters and the demons are uniformly excellent, with the final battle to close out the book producing a pulse-racing finale.

Overall, the book is a compelling, exciting tale set in a well-depicted, realistic world that I look forward to visiting again in future work by this first-time author.