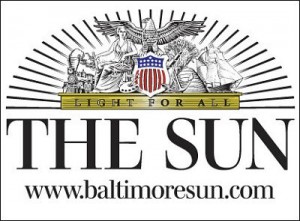 The Baltimore Sun published an editorial on Sunday which completely demolishes the arguments of the heterosexual supremacists who collected signatures to put Maryland's pending marriage law up for a referendum this fall.

Below are two paragraphs which basically encapsulate the way to take down the two (frankly ridiculous) arguments from opponents of marriage equality who claim that allowing same-sex couples to legally marry in the state would 1) affect what is taught to children in schools about marriage and 2) violate the religious freedom of business owners and others.


The law passed by the General Assembly this year says nothing about what should or should not be taught in schools. Contrary to what opponents may try to imply, it includes no mandates about curriculum whatsoever. What is taught in schools is determined not by the legislature but by local superintendents and school boards, and they are focused on making sure students master reading, writing and math. Values are now taught at home, and they will continue to be if this law is affirmed.

As for the question of business owners, the opponents are raising the notion that, for example, a baker who opposed same-sex marriage and refused to produce a cake for a gay wedding could be sued for discrimination. This law has nothing to do with that, either. The gay marriage law is silent on the issue of public accommodations because that has been settled law in Maryland for more than a decade. Just as that hypothetical baker can't now refuse to serve someone because he is Catholic or black or disabled, he cannot refuse to serve someone because of his sexual orientation. That was the result of a law championed by then-Gov. Parris Glendening in 2001. It was controversial at the time, but it has not led to bakers (or anyone else) getting busted by the thought police in the decade since.

But the real delightful part of the editirial is this ending note:


The opponents are resorting to spurious arguments to convince voters that the law will somehow be unfair to those with objections to gay marriages because they don't want to face the real question of fairness at stake. Should the law treat people differently because of their sexual orientation? Or should everyone be treated equally? Maryland's gay marriage ordinance doesn't require anyone to violate their religious beliefs or personal conscience. As much as we hope the debate over this issue will persuade everyone in the state of the value of acceptance and tolerance, the law doesn't force anyone to change the way they think. All it does is to remove a major vestige of discrimination from state law, and that is something all Marylanders should be able to support.

Doesn't get any more clearer than that, really. Your move, heterosexual supremacists! I'd love them to answer these two questions in the editorial "Should the law treat people differently because of their sexual orientation? Or should everyone be treated equally?" And if the answer is no, what is the reason for different treatment under the law for different groups of people based on sexual orientation. And, you don't get to refer to any religious-based reasons, because we're talking about how the state will treat its citizens.
Posted by Ron Buckmire at 8/28/2012 04:22:00 PM