FILM REVIEW: A Most Wanted Man 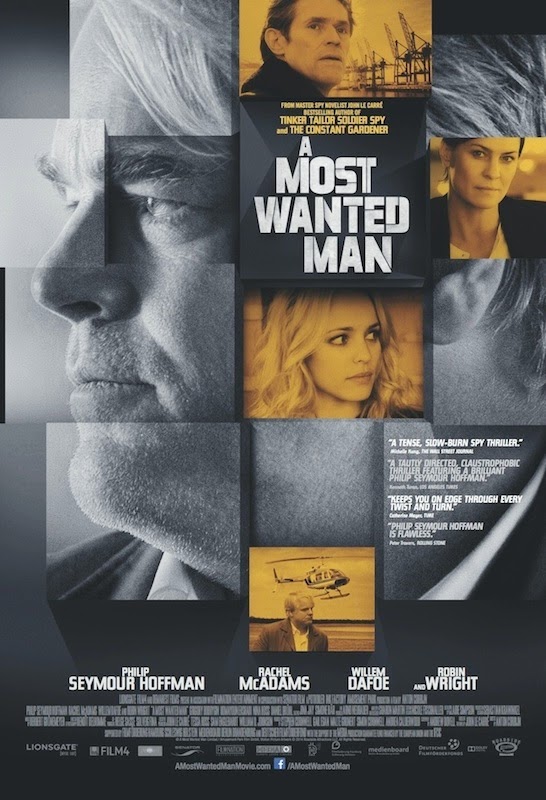 The other half and I wanted to see a movie last weekend and so we went to see A Most Wanted Man which is getting excellent reviews (90% rating on rotten tomatoes) and extra attention as one of the last films starring the late Oscar-winning Philip Seymour Hoffman.

A Most Wanted Man is an adaptation of a book by John le Carré, a spy thriller by the same guy who wrote the source material for Tinker, Tailor, Soldier, Spy. Also starring in A Most Wanted Man is Rachel McAdams (Midnight in Paris), Robin Wright (House of Cards) and Willem Dafoe (The Grand Budapest Hotel). This is not as distinguished a cast as the other le Carré adaptation, which had the likes of Colin Firth, Gary Oldman, Tom Hardy and Benedict Cumberbatch.

The later film has a similar "vibe" to the first, which I think is intentional, even if the directors are different. Both films are about the spy trade. While Tinker, Tailor, Soldier, Spy was about the hunt for a deep cover double (or triple?) agent in British Intelligence in the 1970s A Most Wanted Man is set in Hamburg, post-9/11. A title card as the movie starts reminds the audience that this is the city in which Mohammed Atta planned the attacks of September 11, 2001. Then we see a gaunt white guy with a very long beard and a large backpack drag himself out of a manhole and approach a series of parked cars.

We next see Hoffman as Gunther Bachmann, apparently part of some kind of German domestic secret intelligence service trying to find the next Mohammed Atta. Bachmann looks like a man who is married to his work, overweight, smoking and drinking but clearly dedicated. It turns out the white guy we saw earlier  draws the attention of Hoffman's group because he is a known Russian-Chechen extremist whose name is Issa. Issa apparently is the son of an infamous Russian general named Karpov and he is in Germany trying to claim his inheritance, which is in a secret numbered account held in a bank run by Dafoe's character, Tommy Brue. McAdam plays a naive asylum attorney named Annabel who brokers the connection between Brue and Issa. Bachmann's team knows all this is happening because they immediately have Issa, Annabel and Tommy all under surveillance.

The regular German domestic security service (equivalent to our FBI) and "the Americans" in the form of a raven-haired Robin Wright show up at this point, very interested in trying to capture Issa and stop whatever he's planning, especially when Brue discovers that Issa's inheritance is in millions of Euro. That could buy a lot of bang.

The interesting thing about the movie is that it raises a lot of questions about terrorism, surveillance, interrogation, loyalty and bureaucracy. It's not clear who the film wants the audience to root for, since even a very good man has a little piece of him that might be very bad, as one terrorist hunter says to another, as they dangle an opportunity for one character to take an action that could most definitely be seen to be supporting the movement of money which could support terrorists. But it is the terrorist hunters who create the opportunity and present it to the attention of the "good guy." Hoffman and his team are very willing to allow circumstances to go further and further along so they can get a better view of the bigger picture, perhaps snare a bigger fish, even though they aren't even sure who (or even if) that bigger fish would be.

There's a lot of nuance in A Most Wanted Man, and that makes it thought-provoking and more than a little unsettling as well.