MOVIE REVIEW: Guardians of the Galaxy 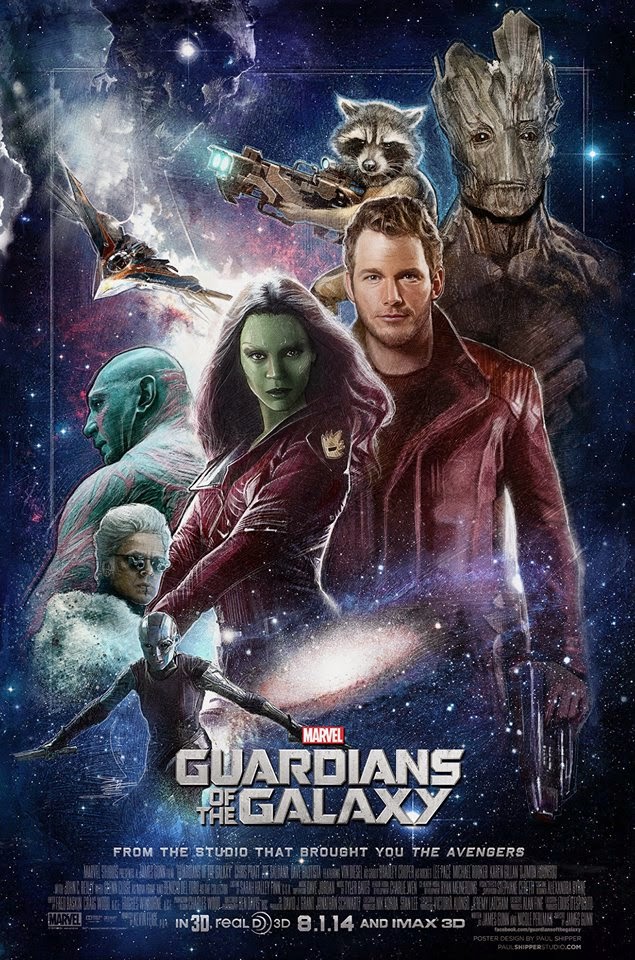 The latest movie from Marvel Studios is Guardians of the Galaxy. This movie has been heavily marketed and I really had not intended to see it but after it was released the film earned excellent reviews and stellar ratings at rottentomatoes.com (92% critics, 96% audience). The film stars Chris Pratt as Peter Quill a.k.a. Star Lord, the sole human member of a rag tag group of misfits and criminals from across the Galaxy that includes Groot (a talking and walking tree-like alien, voiced by Vin Diesel), Rocket (a small furry alien who resembles a raccoon, voiced by Bradley Cooper), Gamora (a green-skinned humanoid played by Zoe Saldana who is also a deadly assassin and daughter of the villainous Thanos) and Drax (a muscular, powerful humanoid who takes all statements a little too literally, played by Dave Bautista).

Guardians of the Galaxy is bolstered by a breakout performance by Pratt as Star Lord. He is funny, sexy, geeky and charismatic--sometimes in the same scene! Pratt is definitely the best thing about the movie, but after him the next best thing is the overall "vibe" of the film, which irreverent and fun. It is also, quite often, a bit ridiculous.

Some examples of the ridiculous aspects of the film include: 1) Glenn Close's hair and make-up (playing the leader of the planet Xandar whose people Thanos is trying to exterminate) is comically bad, resembling a cartoon. 2) Peter Quill has a mixtape of 70's and 80's hit songs from his dead mother which we are to believe that even though these civilizations have spaceships and advanced technology they don't have digital copies of music? 3) There's a scene which takes place in a prison which our characters will of course break out of (is this a spoiler?). The ridiculous part of the scene is basically how easily our heroes escape because of how incompetent the guards are as well as the venality of the other prisoners.

The irreverent vibe is exemplified by the film's great soundtrack and Pratt's goofy but effective dancing, to songs like "Oooh Child," "I'm Not In Love," and "Ain't No Mountain High Enough." Another example is the Star Trek like make-up to indicate alien physiognomy.