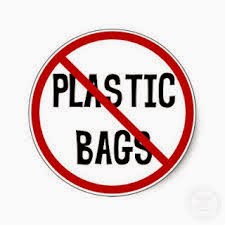 Well, well, well! The California legislature has wrapped up its action for the 2014 year, sending numerous bills to the governor for his signature. One of the most closely watched bills was SB270, which would impose a statewide ban on the use of plastic bags.


Senators who had previously opposed the bill, including incoming Senate President Pro Tem Kevin de Leon, a Los Angeles Democrat, this time supported the measure after protections were added for plastic bag manufacturers.

The bill by Democratic Sen. Alex Padilla of Los Angeles would prohibit single-use plastic bags at grocery stores and large pharmacies in 2015 and at convenience stores in 2016.

It includes $2 million in loans to help manufacturers shift to producing reusable bags and lets grocers charge 10 cents each for paper and reusable bags.
The bill had sparked one of the most contentious debates in the last weeks of the legislative session, with aggressive lobbying by environmentalists and bag manufacturers.

Glad to see my state senator Kevin de Leon finally changed his position and supported this important legislation! I hope Governor Brown signs it into law soon.
Posted by Ron Buckmire at 8/30/2014 01:59:00 PM